The NGO had also contended that the three feet deep pit cannot be made by turtles and may be unfavourable for hatching of eggs. 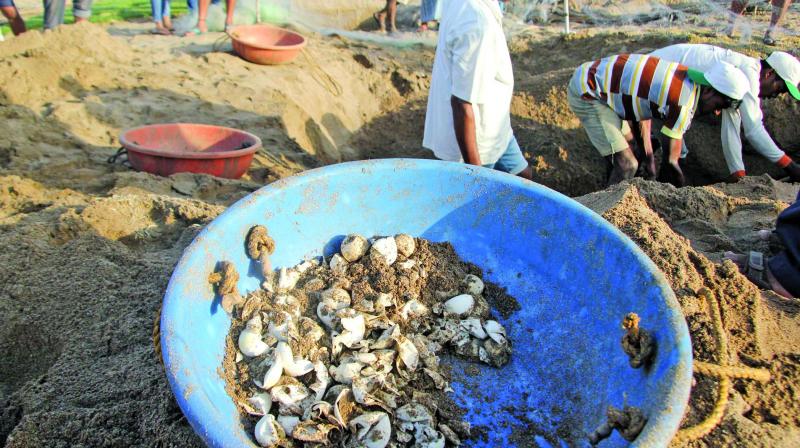 Twelve eggs have not hatched and another four died. (Photo: Mrugesh Bandiwadekar)

Mumbai: The state Mangrove  cell’s site inspection found signs of 103 eggs of Olive Ridley turtles, out of which 80 hatched and made their way into the sea on Thursday. Seven more were rescued and released into the sea. Twelve eggs have not hatched, as the hatchlings are dead, while another four died, as per the panchnama by the Mangrove cell. The site inspection took place after environmentalists questioned the authenticity of claims that Olive Ridley turtles — an endangered species — hatched in a three feet pit at Versova Beach after 20 years.

The NGO Vanashakti had, on Thursday night, written to the Mangrove cell requesting it to investigate the matter, as there were no traces of eggshells found at Versova beach despite the search by multiple naturalists. On reaching the site early morning at Friday, forest officers concluded that the phenomenon witnessed a day before was authentic after it found egg shells of the hatchlings at a spot dug beside the three feet pit.

“Versova beach could turn out to be a favourable place for nesting sites for Olive Ridley turtles. Although it is less likely, but we are considering that there could be more nesting sites here for which we will keep monitoring the place,” said N. Vasudevan, additional principal chief conservator of forests, State Mangrove Cell.

Mr Vasudevan further said, “There were reports of some sightings of the species during last December, however there have not been any nesting incidents in several years. We believe that some 15-20 years back, there may have been nesting at the site. They could have returned to the beach to lay eggs as turtles generally return to the place where they are born to hatch their eggs,”

The NGO had also contended that the three feet deep pit cannot be made by turtles and may be unfavourable for hatching of eggs. When The Asian Age visited the site, locals claimed the pits are dug for fenugreek cultivation where the turtle must have entered and laid eggs.

“Now that the Mangrove Cell is looking at the possibility of nesting sites at Versova beach, it should be cordoned off and proper measures and monitoring should take place to prevent the destruction of nesting sites from any kind of human activities,” said Stalin Dayanand, project director, NGO Vanashakti.