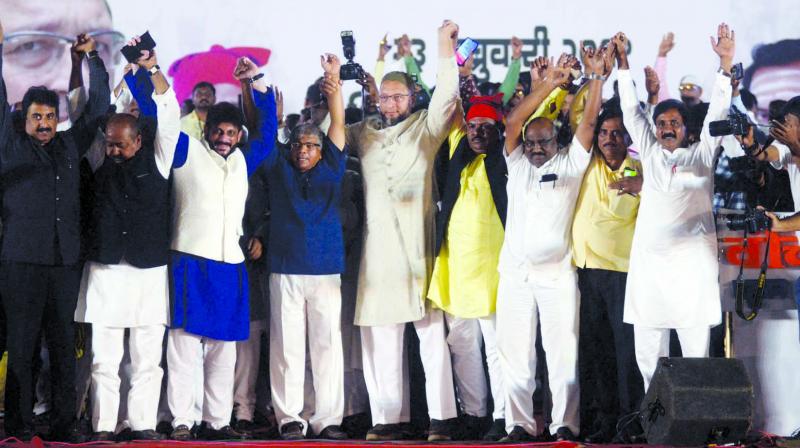 “Who is responsible for the death of 40 soldiers in the attack?” asked Mr Owaisi while addressing the first joint rally with Dalit leader Prakash Ambedkar at Shivaji Park in Mumbai.

“About 200 kgs of RDX was used for the blast in Pulwama. The nation wants to know who is responsible for this and what action will be taken against them. Was the intelligence department sleeping?”, he said.

The Modi-government’s attempt to put diplomatic pressure on Pakistan has also failed, said Mr Owaisi. “All claims of Mr Modi pressurising Pakistan diplomatically are false. Despite giving a grand welcome in Ahmedabad, China’s president Xi Jingping is creating hurdles in declaring Masood Azhar, the mastermind of Pulwama attack, as a terrorist,” he said.

Calling the Pulwama attack as a political failure, Mr Owaisi said, “The BJP had a government in Pakistan along with the Peoples Democratic Party (PDP). The governor regime also belongs to the BJP. Despite this, they failed to prevent the attack in Pulwama.”

He also appealed to the Muslim community not to support the Congress. “The Muslims should stop supporting the Congress. It is responsible for the plight of Muslims in the country today,” he added.

The rally was organised by the Bahujan Vanchit Aghadi, a political umbre-lla of left outs led by Dalit leader Prakash Ambedk-ar. If elected by people, the BVA will try to solve the issue of downtrodden people, said Mr Ambedkar.

“There is no issue in seat-sharing with Congr-ess, but we have ideological differences, as they incline towards Hindut-va,” Mr Ambedkar added.

“When it comes to an attack on the nation, the entire India becomes one. There is unity in diversity in the country,” he added.

The AIMIM chief also criticised the BJP government saying it’s polices are anti-Muslim. “In last four and half years, anti-Muslim policies were implemented by the government on a large scale. Mr Modi can’t impose his ideology on the Muslim community.”

Even the ministers in the Modi-government are making statements against the Muslims.”