The sources close to the development said that the police will probe the matter further and ruled out any possibility of naxal invovement. 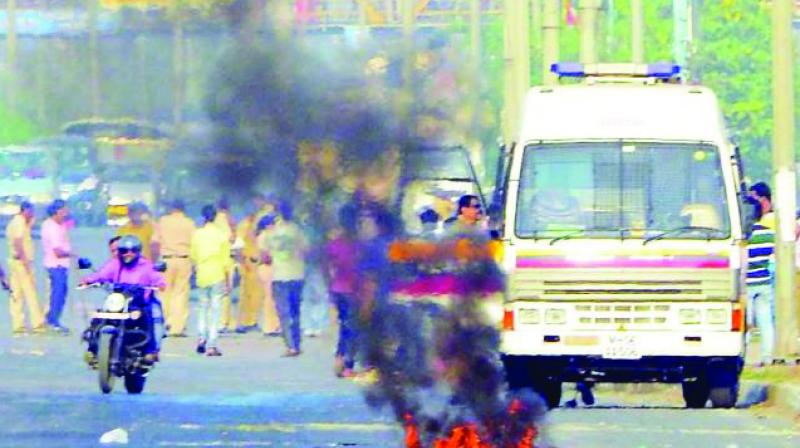 Dalits groups had protested against the violence in Bhima-Koregaon on January 1.

Mumbai: Investigation agencies probing the Bhima-Koregaon violence have ruled out any possibility of naxal involvement.

The matter has been placed before the commission comprising a retired judge and the chief secretary. However, sources close to the investigation denied any naxal links. A few reports had expressed possibility of naxal involvement behind the violence.

On Friday, the Pune police had called Milind Ekbote — who is one of the accused of Bhima-Koregaon violence — for an inquiry. As the Supreme Court has given him interim bail, the police could not arrest him.

The sources close to the development said that the police will probe the matter further and ruled out any possibility of naxal invovement. "We have checked the possibility of naxal involvement in the violence but there was nothing. We are aware that there were a few reports on this. But no such link has been found so far," the source said. The radical Hindutva leader Milind Ekbote is related to Hindutva organisations and it was alleged that he instigating the assailants before Bhima-Koregaon programme, which took place on January 1.

Another Hindutva leader Sambhaji Bhide was also accused of instigating youths against the programme. Two people were killed and hundreds injured in the violence, and many women and children who were returning home from Pune were attacked in the violence. The police had detained many for inquiry.

Following the incident, a demand was made for a judicial probe, which the government agreed to. Retired judge J.A. Patel and chief secretary Sumit Mullick will conduct the inquiry and give its report on the violence.

The government has already decided the framework for the committee.