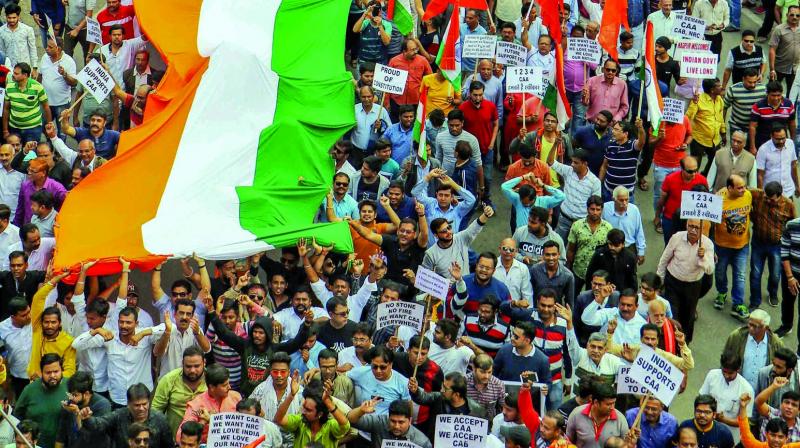 Various right-wing organisations take part in a rally in support of the Citizenship Amendment Act in Nagpur on Sunday. (Photo: PTI)

Mumbai: Amid the uproar over the Citizenship (Amendment) Act across the country, a rally was organised in Nagpur on Sunday by a Rashtriya Swayamsevak Sangh-affiliated body in support of the law.

The Bharatiya Janata Party (BJP) and the RSS supported the rally, which was organised by the Lok Adhikar Manch.

Senior BJP leader and Union minister Nitin Gad-kari  and former Maharas-htra chief minister Deve-ndra Fadnavis joined the rally. Mr Gadkari asserted that the Act was not against the Muslim community in India.

The Union minister said the NDA government was not doing any injustice to Muslims in the country by bringing the new law. He also accused the Congress of spreading “misinformation” over the issue for ‘vote bank politics’.

Addressing a rally in the state’s winter capital in support of the Prime Minister Narendra Modi government’s decision to enact a new law, which seeks to provide citizenship to persecuted minorities from Pakistan, Afghanistan and Bangladesh, Mr Gadkari said, “The decision taken by the government to give justice to religious minorities from Afghanistan, Pakistan and Bangladesh is not against the Muslim community of India. We are not talking about sending Muslims out of the country.”

The Union minister said that the government’s only concern was foreign intruders living in the country. He said that Muslims should understand that the Congress couldn’t help in the development of the community.

“What has it (Congress) done for you? I request the Muslim community of the country to understand the conspiracy. Your development can be done only by the BJP and not the Congress,” the BJP leader said. “You used to ride cycle-rickshaw, we gave you e- rickshaw and helped you stand. The Congress considers you as a vote machine so that it can rule afterwards. Don’t fall for this misinformation,” he said. “We all are one, our legacy is one. You go to Masjid, we don’t oppose it. We all will live together and work according to the Constitution framed by Dr Babasaheb Ambedkar. This is what we have been saying, not anything new,” he said.

Dr Ambedkar, Mr Gadkari said, had said that Muslims of Islamic countries have 100 to 150 alternatives and can get shelter in any Muslim country, “but Hindus, Sikhs, Indian Buddhists, Christians, Jains have no nation to go”.

Mr Gadkari said before 1947, there was an “Akhand Bharat” but after partition, Muhammad Ali Jinnah declared Pakistan a Muslim nation.

“But, in our country, under the leadership of Mahatma Gandhi, it was accepted that our nation would not be a Hindu Rashtra, but a secular nation for all communities,” he said.

When this was decided,  Mr Gadkari claimed, Mahatma Gandhi was asked where will 22 per cent Hindus, Sikhs, Jains, Parsis and Christians of Pakistan go if they face injustice and persecution. “Gandhiji replied that minorities in Pakistan and Afghanistan, whenever they will require support, India will support them," he noted.

On the other hand, Mr Fadnavis said that this Act was not against any community or religion and alleged that some political parties were spreading falsehood about the new law to create unrest in the country.

While addressing the rally, he said that people were now coming out on streets in support of the amended citizenship law.

“People are supporting the amended citizenship law in huge numbers. The Act is in the interest of the country and it is not against any communityor religion,” said Mr Fadnavis. He also said, “But some political parties are knowingly misleading people and trying to create unrest in the cou-ntry.”

There have been anti-CAA protests across the country with several of them turning violent, leading to arson and damage to property.