Old and new notes still up for grabs on online portals

The cyber police said that they were verifying the listings and would take appropriate action after investigation. 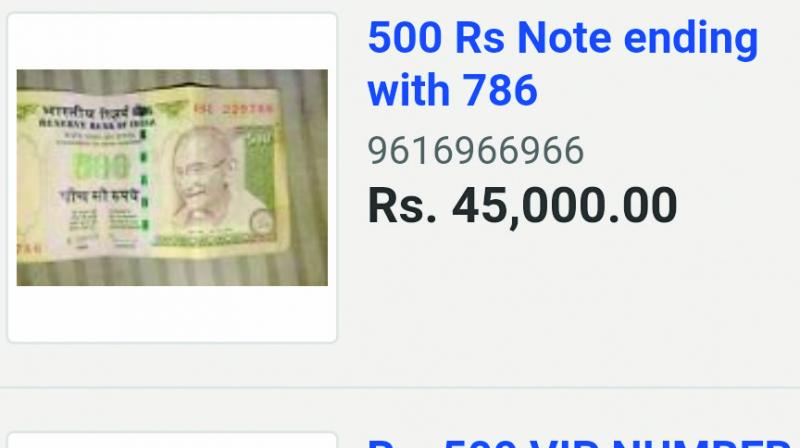 A screengrab from eBay.

Mumbai: While the Mumbai police’s cyber cell wing is looking into the selling of currency notes on online retail sites, one of the websites, eBay, still has listings for the same. When The Asian Age checked the site on November 22, the advertisements of people selling Rs 500 and Rs 1,000 still existed. Believe it or not, but there was also a listing for the sale of the new Rs 2,000 note.

The Mumbai police decided to look into the matter after The Asian Age reported on November 17 regarding the sale of scrapped currency (Rs 500 and Rs 1,000) being sold on eBay and OLX.

When contacted, a lawyer Abhishek M, practising in the high court, said that selling currency notes through any channels was illegal. “It is not legal to sell currency notes even on websites. Only the Reserve Bank of India can issue notes and once any currency is scrapped no one can even hoard it,” he said. He added that if a person was selling it then he was in a way hoarding it too and that counted as hoarding black money. He said that this was against the provisos of the RBI Act.

The same was confirmed by Alpana Killawal, a spokesperson for RBI, “Currency selling is not legal. But the RBI cannot take any action and the police needs to take steps,” she said. The cyber police said that they were verifying the listings and would take appropriate action after investigation.

When the site eBay was contacted on Thursday, the spokesperson informed that they were working on taking down the listings for the Rs 2000 note. But on Tuesday, when it was pointed out to them that listings for the denotified notes still existed, the website refused to comment.