The Sena has also not spared NCP chief Sharad Pawar who initially appreciated the move of demonetisation and later criticised it. 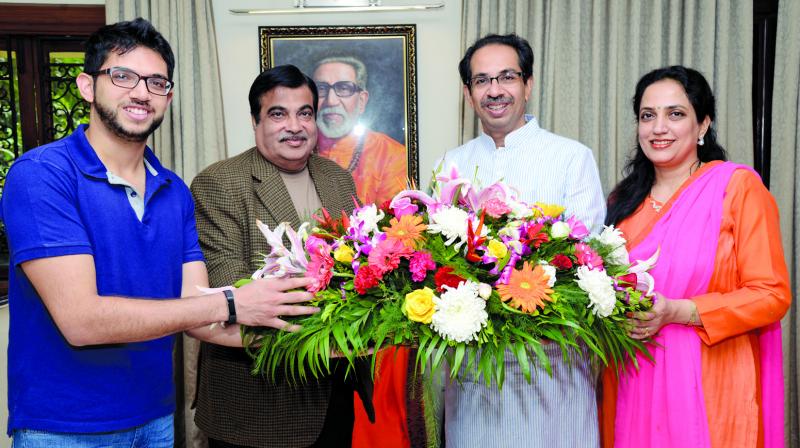 Mumbai: BJP leader and Union minister Nitin Gadkari’s visit to Shiv Sena chief Uddhav Thackeray’s residence on Tuesday has triggered speculations in political circles that BJP is trying to assuage its alliance partner in the Centra and the state.

Shiv Sena has, however, clarified that Mr Gadkari had come to Matoshree to invite Mr Thackeray’s family for his daughter’s wedding. Meanwhile, the party through its mouthpiece Saamana continued its tirade against demonetisation.

Mr Gadkari went to Matoshree this afternoon and was there for half an hour. He invited the Thackerays for his daughter’s wedding. Sources in the Sena said there was nothing political about the meeting and it was a personal visit. “Gadkari shares good relations with the Thackerays. It was a personal visit and there was nothing political about it,” a Sena leader said.

Meanwhile, targeting PM Narendra Modi, the Sena asked why only the common man was being harassed following the demonetisation process. “The government is deciding how the people should live and those who are raising their voice against are being branded as anti-ationals,” the Sena said.

Coming down heavily on the new diktat by the Centre about seven years imprisonment for transferring money in somebody else’s name, the Sena said that punishment should be life imprisonment. “Why only seven years? The punishment should be life imprisonment. But the question is why are you making the common people a scapegoat? How many big fishes have been punished who control the country’s economy? None of them were standing in the queue. So, Modi followers will have accept that the real black money is still not out,” it added.

The Sena has also not spared NCP chief Sharad Pawar who initially appreciated the move of demonetisation and later criticised it. “If Pawar would have criticised it when Modi shared stage with him in Baramati, then we would have understood his true sentiments. But taking different stands in Baramati and Mumbai is not in favour of the public. Hardships cannot be imposed on ordinary citizens for mistakes of the rich. Hang all 125 crore people of the country,” the Sena said.