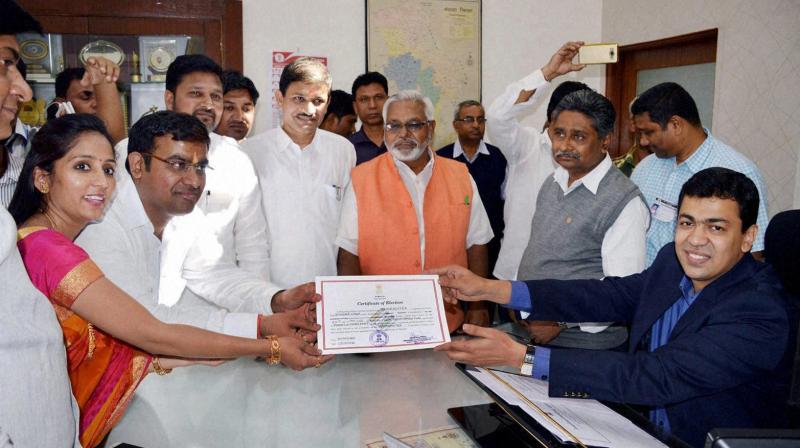 Meanwhile, the NCP lost three out of four sitting seats, while the Congress gained one more seat and the Shiv Sena won the Yavatmal seat. “The poll to elect six MLCs in the Upper House was tough for both the Congress and NCP as they broke their alliance and contested the election independently. Prime minister Narendra Modi’s visit to Baramati and Pune and him praising NCP chief Sharad Pawar worsened the latter party’s relationship with the Congress and also created confusion among party cadres of the Congress, NCP and even the BJP as well,” said a Congress insider.

In Bhandara-Gondia, Mr Fuke grabbed 220 votes out of a total of 382 valid votes. Mr Jain could gain 137 votes while the Congress’ Praful Agrawal won 112 votes.

Mr Agrawal is the son of party legislator Gopaldas Agrawal, who has a political rivalry with Mr Patel, whose bastion  Bhandara-Gondia is.

The vice-chairman of the state legislative council, Manikrao Thakre, hails from Yavatmal. But that did not stop the Shiv Sena’s Tanaji Sawant, an outsider, from winning this seat by a margin of 270 votes, while Mr Thakre’s candidate, Shankar Bade, got a mere 78 votes out of a total of 428 valid votes. Outgoing NCP member Sandeep Bajoria gain just two votes.

In Jalgaon, the BJP retained its seat despite a change in candidate. The party fielded Chandulal Patel, a supporter of minister Girish Mahajan, while outgoing MLC Gurumukh Jagwani was a supporter of ousted minister Eknath Khadse.

As the BJP has a hold in the municipal council and corporation, the fight was one-sided.