The demonetisation has also pushed some medical professionals to streamline their transactions. 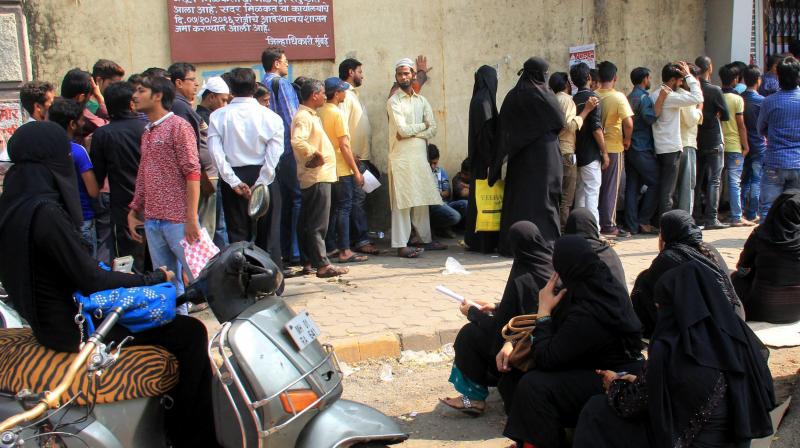 People stand in long queues outside a bank to exchange their old Rs 500 and Rs 1000 notes in Mumbai (Photo: PTI)

Mumbai: A fortnight into demonetisation, long queues outside banks and ATMs across the metropolis saw a decline on Wednesday even as citizens were apprehensive about the rush they might face again in the month-end, when salaries are due and banks pace up operations.

"I successfully withdrew some cash today in 15 minutes, as against spending five hours on November 13. But we should not forget that banking operations usually slow down in the last few days of the month. Therefore, in the beginning of the next month, it would be really a testing time again," said a retired bank professional residing in Chembur.

However, there were some others who were unfazed by the hardships resulting from the government's decision to scrap Rs 500 and Rs 1,000 notes.

According to Pratap Singh from Bihar, who once served as a district and sessions judge and now lives in Nerul, "as far as cash flow-related difficulties are concerned, they are temporary in nature and a natural fall out of such a bold step."

"In fact, my spouse and I who always preferred to pass on our cards to children, are now queueing up outside ATM machines. After all, getting money does not take much time so as to tire us out," he said.

The demonetisation has also pushed some medical professionals to streamline their transactions. They are now accepting payments via unconventional methods by turning to medical apps.

A noted physician and director of ACS Health services, Dr Ashish Tiwari said, "We understand the hardships of our patients, and therefore, we are giving them some grace period to pay the fee. However, apart from accepting fees through services like Paytm, doctors as well as patients are turning towards android and iOS-based medical apps such as 1mg, Practo, Portia etc to cope with the situation."

When asked about shorter queues outside ATMs, a leading bank executive said, "Nearly half of the ATMs have been re-calibrated and in coming days, the rush should get over."