The BJP chief’s statement comes at a time when the Shiv Sena is hardselling its leader Aaditya Thackeray as a probable chief ministerial face. 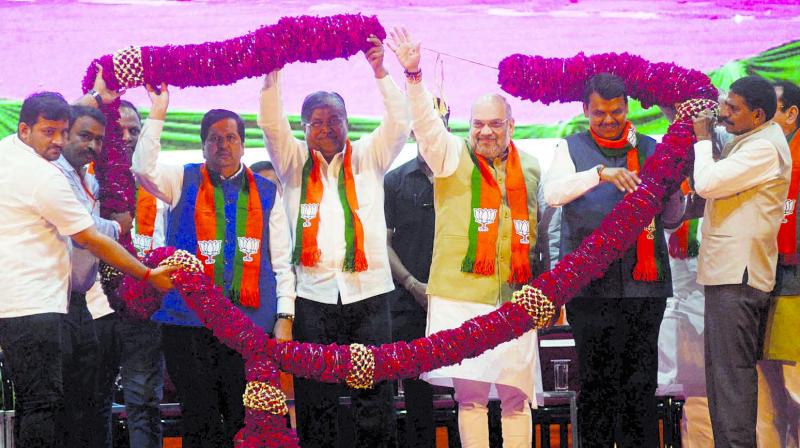 Mr Shah’s announcement is significant as there were speculations that Mr Fadnavis would be sent to the Centre after the saffron party appointed revenue minister Chandrakant Patil — a noted Maratha leader —as its state unit chief.

Mr Shah said that the people of Maharashtra had made it clear in the Lok Sabha elections itself that the BJP would form the government in the upcoming Assembly elections.

The BJP chief’s statement comes at a time when the Shiv Sena is hardselling its leader Aaditya Thackeray as a probable chief ministerial face.

Meanwhile, Mr Fadnavis reiterated that his part would record an unprecedented success in the Assembly election.

Political observers now believe that the BJP would not come under pressure from the Sena over seat-sharing and the chief minister’s post, with Mr Shah expressing confidence that his party would form its government with a majority.

Speaking at a private TV news channel’s conclave on Saturday, Mr Fadnavis had said that he would be back as the next CM in the upcoming election.

Saturday’s statement came two months after he exuded confidence that he would be back as the chief minister after the Assembly election. In the same meeting, which was attended by party workers, Mr Fadnavis had also said that he was not only the chief minister of the BJP but also of the Shiv Sena, RPI and RSP.

No dearth of money for infra projects: Nitin Gadkari