The president also said that if practiced correctly, Vipassana can provide similar benefits to that of certain medicines. 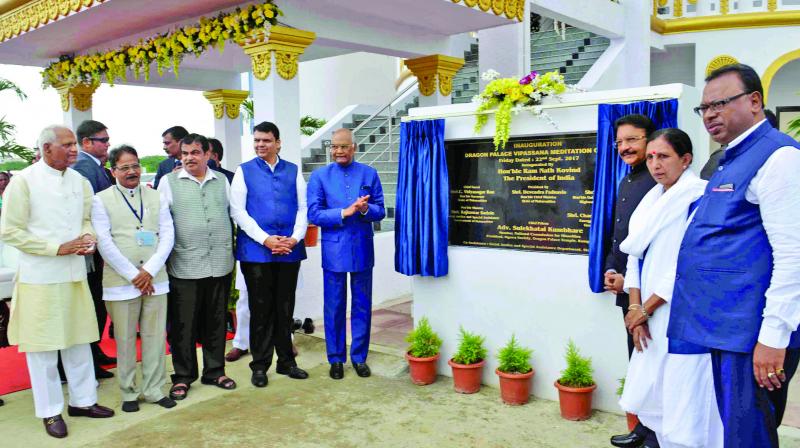 The Vipassana Centre was inaugurated on Friday, in the presence of chief minister, among others. (Photo: PTI)

Nagpur: President Ram Nath Kovind on Friday said that Vipassana is a meditation technique propounded by Lord Buddha, which helps us in connecting with our inner selves. It is an effective way to cleanse our mind and body and equips us to face the stress of modern life. He added that like Yoga, Vipassana should not be seen as being associated with any particular religion for it is beneficial for the welfare of humanity.  He was speaking at the inauguration of the Vipassana Meditation Centre at the Dragon Palace Temple complex in Kamptee in Nagpur district.

The president also said that if practiced correctly, Vipassana can provide similar benefits to that of certain medicines.

Mr Kovind said that the ideals of Buddhist philosophy are reflected in our Constitution and that the urge for social change was central to Lord Buddha’s philosophy. He said that the same had inspired many social reform movements, a number of which took place in Maharashtra. He said these movements had further inspired other such movements across the country.  In today’s age of insecurity, the message of non-violence, love and compassion, given by Lord Buddha is extremely relevant, he added.