Born at 22 weeks, baby survives against all odds

He was on respiratory support from 12 weeks, which included 6 weeks of ventilator support. 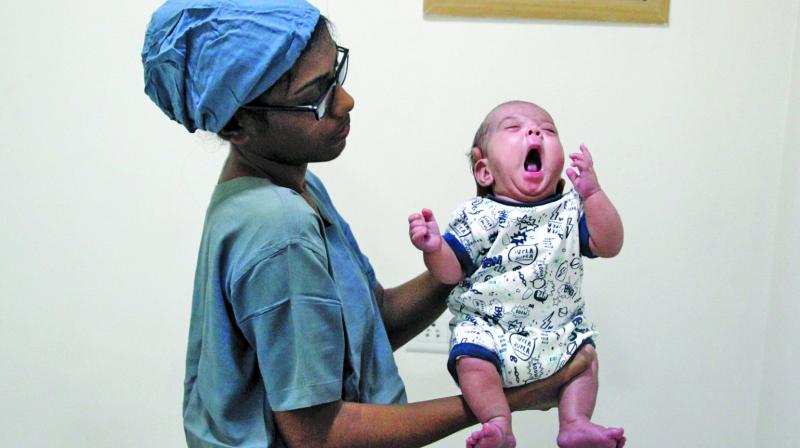 Mumbai: Fighting against all odds, baby Nirvaan has become one of the youngest premature babies in the country to survive, according to the doctors of the privately run Surya Hospital at Khar.

Born on May 12, in the 22nd week of pregnancy, and weighing a mere 610 gm, which was followed by a further weight loss, fatal medical emergencies and multiple surgeries, the Khar hospital doctors managed to hand over a healthy 3.5 kg Nirvaan to his parents.

The hospital doctors have claimed that he is the youngest premature baby to survive. When asked about this claim, the state-run Cama Hospital’s medical superintendent Dr Rajeshri Katke said that its not possible to comment on the claims as the Cama Hospital has previously treated a premature baby weighing 710 gm. Dr Katke told The Asian Age, “This might be the first baby, but our hospital has treated a premature baby weighing 710 gm. If the treatment is proper, then the survival rate is any time higher. With proper treatment and good oral feed, the baby can go home in a healthy state.”

However, the neonatologist of the civic-run Sion hospital, on the condition of anonymity, said, “We can say that this is the first baby weighing 600 gm. I have not seen any baby that’s this small.”

Dr Bhupendra Awasthi, director of Surya Hospital, said, “Nirvaan had immature lungs at birth and required ventilator support right from the labour room. He was on respiratory support from 12 weeks, which included 6 weeks of ventilator support.