Says manhole cover was not opened by municipal employees on Aug 29. 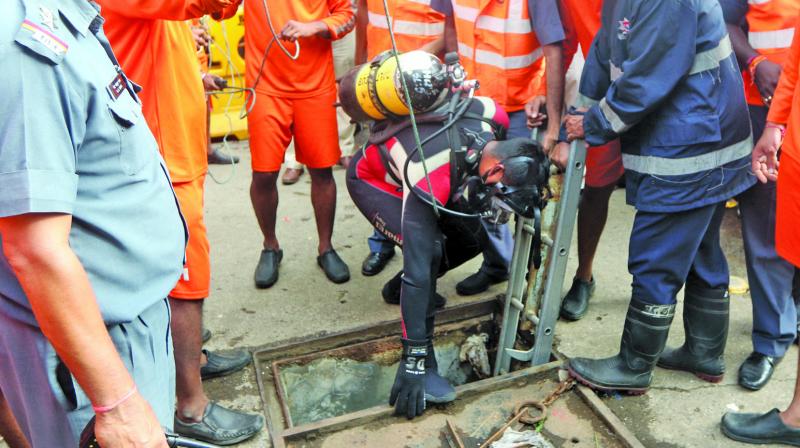 Rescue workers tried to locate the body of Dr Deepak Amarapurkar after he slipped into an open manhole near Parel during the August 29 rains.

Mumbai: The Brihanmumbai Municipal Corporation (BMC) has exonerated itself from the death of renowned gastroenterologist Dr Deepak Amrapurkar, saying that the manhole cover was not opened by municipal employees during the heavy downpour on August 29. In order to prevent such accidents in the future, the civic inquiry committee has recommended the installation of a mesh cover below the manhole cover to avoid loss of life. Additionally, it has also suggested that an automatic mechanical maintenance system be set up to clean drain outlets and pumping stations so that they are not choked due to garbage.

Dr Amrapurkar had gone missing on August 29 when torrential rains had led to severe flooding in most parts of the city. However, his body was recovered by the coast guard divers from the Worli seashore. It is suspected that his body was washed ashore after he fell into an open manhole in Lower Parel, while walking through the flooded streets to reach his Prabhadevi-based residence. The BMC had formed an inquiry committee to investigate his death.

The probe report says that, “From the statements of the staff of the storm water drains department in G-South ward, it seems that the manhole, in which Dr Amrapurkar fell down on Shankar Laxman Matkar Marg, was not opened by municipal employees. The CCTV footage procured from police and shopkeepers along the road shows that the manhole was opened by a group of 4-6 people. They left the place without shutting the manhole. The police department is expected to carry out future investigation and take appropriate action against concerned
people.”

The committee has recommended a slew of measures to avoid loss of life in such cases. “A mesh cover should be installed 5-6 inches below the manhole cover so that even if the manhole remains open, water will be discharged. Things like plastic, thermacol, clothes, wood etc thrown around by people are finally washed away to storm water drains. They are stuck in the outlets of drains and pumping stations leading to water not getting discharged properly.

Public awareness should be created among the public about open manholes. Citizens and shopkeepers living at the flooding spots should be alerted about illegally open manholes in their areas to inform civic body immediately if anyone is found opening the manhole, said the report.

The police has so far arrested five people, all local residents, in connection with the death of Dr Amrapurkar. Siddhesh Belsekar (25), Dinar Pawar (36) and brothers Rakesh Kadam (38) and Nilesh Kadam (33) were initially arrested by police for allegedly opening a manhole. The fifth man arrested was Raj Shirpurkar (28), a resident of Manubhai Bhagwandas chawl in Parel. The police said the men wanted the water from their homes to flow out through the open drain.