The fire broke out on the 12th floor at 8.32 am and soon spread to other parts of the building. 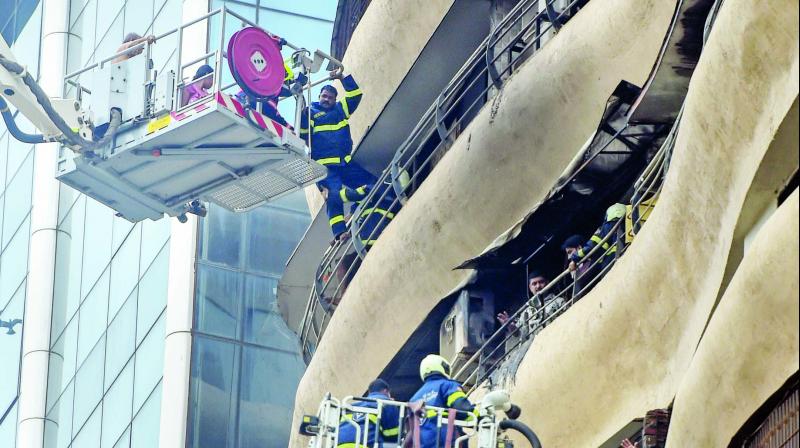 While people living on lower floors managed to flee, residents on upper floors were stuck in the galleries of their flats.

Mumbai: Four people, including an elderly woman, were killed and 21 were injured in a major fire that broke out in a residential high-rise building in  Parel on Wednesday morning. The developer Abdul Razak Ismail was arrested late on Wednesday. The building, which had no occupation certificate (OC), was illegal and has now been declared unsafe by the Brihanmumbai Municipal Corporation (BMC).

The fire broke out on the 12th floor at 8.32 am and soon spread to other parts of the building. While people living on lower floors managed to flee, residents on upper floors were stuck in the galleries of their flats. They were rescued by the Mumbai Fire Brigade (MFB) fighters, which brought the fire under control after nearly three hours. The fire fighting system of the building was not in working condition, said fire officials. The firemen rushed the injured people to the KEM hospital. However, four people—Shubhada Shelke (62), Bablu Sheikh (36), Ashok Sampat and Sanjeev Nair —were declared brought dead by hospital authorities. The conditions of 21 injured, who are undergoing treatment, is stable, said civic officials.

According to local residents, there was smoke everywhere soon after the fire erupted. Jeetendra Chavan, a 64-year old resident on the fifth floor, said, “We ran down from the stairs. While doing so, we saw fire spreading to electric circuits of the building.” “The smoke from the raging fire spread rapidly, trapping residents,” said P. S. Rahangdale, the chief fire officer of Mumbai Fire Brigade. Apart from declaring the building unsafe, the fire brigade has also asked the authorities to disconnect its electric and water supply.

According to civic officials, the 17-storey Crystal Tower building, which is opposite the Hindmata Cinema, was not issued OC by the BMC. The OC is a mandatory certificate given by the civic body allowing people to reside in the building. It also specifies that the building's construction was completed as per the approved building plan.