According to residents, the fire might have started from Shaikh’s flat. 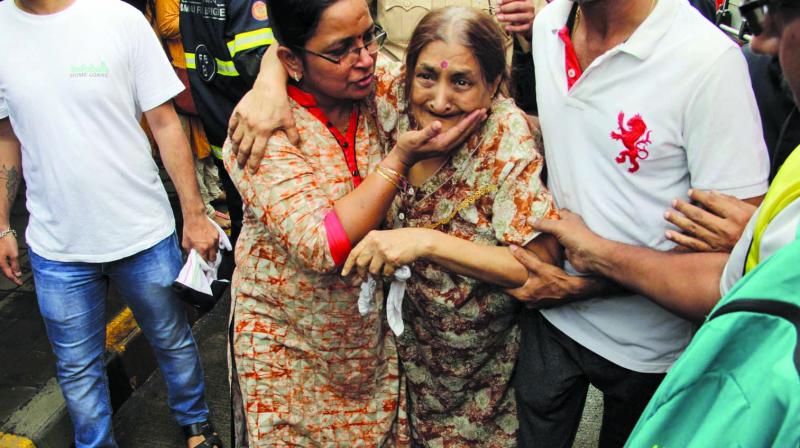 Woman breaks down after she was rescued. (Photo: Asian Age)

Mumbai: The fire that gutted the 12th floor of Crystal Tower, Parel, also extinguished the Bakri-Eid celebrations of the Shaikh family. Mashooq Shaikh (47) suffered severe burns even as his son, Azhruddin Shaikh (31), escaped with minor injuries.

A member of the Shaikh family, Irfan Mohaammed, said, “The family was cheerful owing to Eid but now, most of us aredoing the rounds of the hospital and medical stores due to the fire. Mashooq Shaikh is facing a tough time…”

According to residents, the fire might have started from Shaikh’s flat.

Meanwhile, youngsters who rushed to save residents from the fire also got injured in the process. Many locals who jumped into the fray escaped with minor injuries.

Abdul Rehman, one of the rescuers, said, “Around 10 minutes after we got done with morning prayers, a massive amount of smoke was found emanating from
the 12th floor of the building. Most of us present there rushed to the spot and even rescued some of the residents.”

Meanwhile, a fireman was admitted to the hospital after losing consciousness upon inhaling excessive smoke while dousing the fire.

Another fireman who was part of the rescue operations said, “There was a very dense cover of  smoke and we could hardly see anything.”