The costs of raw materials and the idols have gone up by 20 per cent. 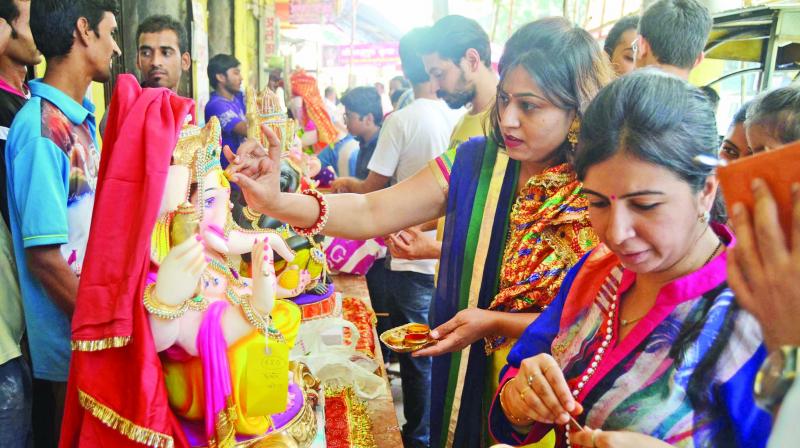 File image of women praying to Ganpati idols during the ten-day festival in the city.

Mumbai: With just a few days to go for the city’s most loved festival, Ganesh Chathurthi, Mumbaikars are feeling the pinch, as they have to shell out 20 per cent more for idols as compared to last year. Though cost of idols varies depending on their height and the amount of raw materials used, a five-foot Ganesh idol, which cost between Rs 11,000-12,000 last year, will now costs Rs 18,000 due to GST.

“Last year, a two feet idol cost Rs 2,500, but now the cost has escalated to more than Rs 3,000. All idol shops in the market are following the same price pattern as basic raw materials like PoP have become costlier with 18 per cent GST levied on them,” said Deepak Angane, an idol shop owner from Goregaon.

Idol makers or murtikars as they are commonly known, are bearing most of the brunt as they have purchased raw materials like PoP.  “This year, it was a loss for murtikars like me because we hiked prices because of the PoP cost. But not many buyers are willing to shell out that much money, so we had to bring down the rates to stay in the competition,” said Santosh Kamble, an idol maker from Lalbaug.

However, decorators are not facing such a dire situation as the raw materials used by them for decoration, like colorful nets, sponge, artificial flowers, paints etc have seen a nominal hike.

“Majority of the raw material, except for sponge has seen a hike in price, but just by Rs 20 or Rs 50. For example, a bundle of net, which cost us Rs 550 last year, is now priced at Rs 600 because of GST,” said Sandeep Gadge, a decorator who has been in the business for 40 years. However, the price of sponge has reduced by Rs 40, hence the decorators have reduced the price of small mandaps, which require maximum sponge.

Also with five per cent GST being levied on thermocol has pushed the cost of design sheets made of it by five
per cent.

But the mandals across the state have a totally different story to tell. “We had booked our idol last year, so we didn’t pay a higher price for it. But we did have to pay an additional Rs 25,000-Rs 30,000 for lighting and other decoration,” said Arjun Chavan, from a Ganpati mandal in Kolhapur.