Devendra Fadnavis to hold rath yatra across Maha ahead of polls

In the Lok Sabha polls, the BJP had embarked on a rath yatra in West Bengal, which paid it rich dividends as the party won 18 seats. 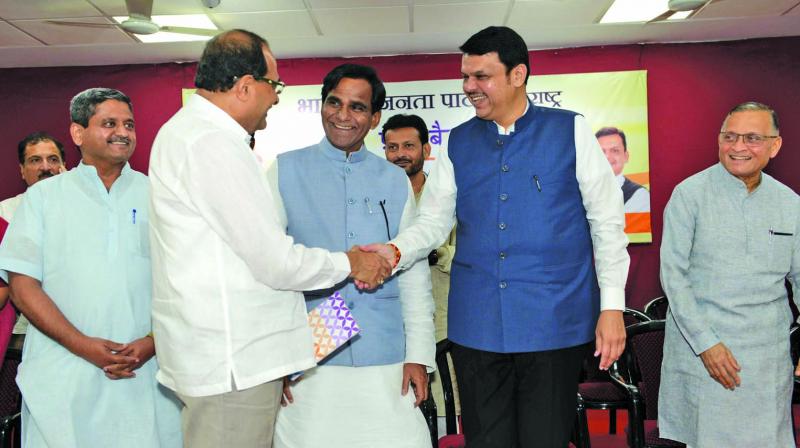 Mumbai: The Bharatiya Janata Party (BJP) is set to test its successful election formula as chief minister Devendra Fadnavis will take out rath yatra around all Assembly constituencies of the state.

“The rath yatra will reach every Assembly constituency in the state. We want to bring back the Shivshahi Sarkar in the state and we have set a target of winning 220 seats in the Vidhan Sabha polls,” said senior party leader and revenue minister Chandrakant Patil.

While the Opposition parties are still in disarray after the Lok Sabha poll debacle, the BJP has already planned its campaign for the state Assembly polls, which will be held in four months.

As a part of this, chief minister Devendra Fadnavis and state unit chief Raosaheb Danve held a meeting of BJP state-level leaders and officials on Saturday.

“We will approach the voters confidently based on the development works carried out in last five years and just like Lok Sabha polls, we will create a tsunami of victory in the Vidhan Sabha polls too,” the chief minister said.

Ahead of the Assembly polls, the party has also set a target of increasing its membership by 25 lakh by strengthening its base at the booth level in all 288 constituencies. In order to achieve this, a unit of five booths will be made in every constituency and 20,000 booth unit heads across the state will lead them.

The party has a long history of holding rath yatras before the elections. BJP’s senior leaders Atal Bihari Vajpayee and Lal Krishna Advani had carried out a rath yatra several times.

In the Lok Sabha polls, the BJP had embarked on a rath yatra in West Bengal, which paid it rich dividends as the party won 18 seats.