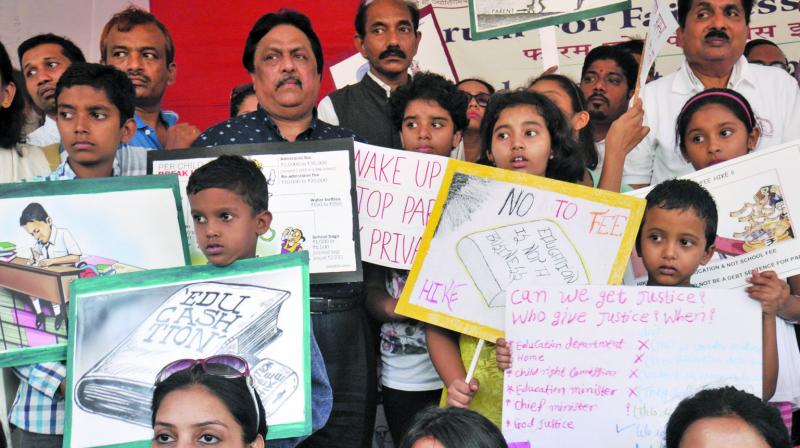 Parents and students protested against the hike in admission and tuition fees.

Mumbai: Aghast at the stand taken by the education department regarding the fee hike issue, activist, advocates and parents have lambasted the decision and alleged that it is against the UN convention signed and ratified by India in 1992 that stipulates free primary education on the basis of equal opportunity.

They were criticising the suggestion made by Nand Kumar, principal secretary of school education, that if parents protesting the fee hike in a school are in the minority they should either pay up or deroll their children.

The suggestion is also against the Protection of Child Rights (PCR) Act enacted in 2005, which enumerates education as a fundamental right and the Right To Education (RTE) Act, 2009, which stresses on free and compulsory education to children in the age bracket of 6-14 years. They alleged that suggestion indicates that the government is not interested in curbing commercialisation of school education.

Jayant Jain, president of Forum for Fairness in Education (FFE), said Mr Kumar’s suggestion is “shocking.” “The suggestion by Mr Kumar is irresponsible and hints at the government’s unwillingness to curb the profiteering by unaided schools.

Rather than taking the schools head on and making them accountable for their actions, the government is asking parents to take their children out. Mr Kumar should be sacked for making such loose suggestions,” said Mr Jain.

Advocate Siddharth Murarka, who specialises in matters pertaining to violation of child rights and education, said if the government wanted school fees to be regulated as per market forces of demand and supply and recognised it as a commercial entity, then all exemptions that private unaided schools claim should be discontinued and they should be taxed like any other business enterprise.

Saurabh Gupta, a parent from the western suburbs, said, “We were hopeful that the BJP (Bharatiya Janata Party) government would put an end to commercialisation of education and profiteering by private unaided schools but it seems that they are as indifferent to the woes of parents as the previous government. In fact, asking parents to take out their children if they are not happy with the fee hike indicates that the government has no compassion for the hapless common man.”

Article 28
1 States Parties recognise the right of the child to education, and with a view to achieving this right progressively and on the basis of equal opportunity, they shall, in particular:

2 States Parties shall take all appropriate measures to ensure that school discipline is administered in a manner consistent with the child's human dignity and in conformity with the present Convention.