Mr Modi slammed the Congress and the NCP alleging that their leaders deprived of sugarcane farmers from the benefits of ethanol production. 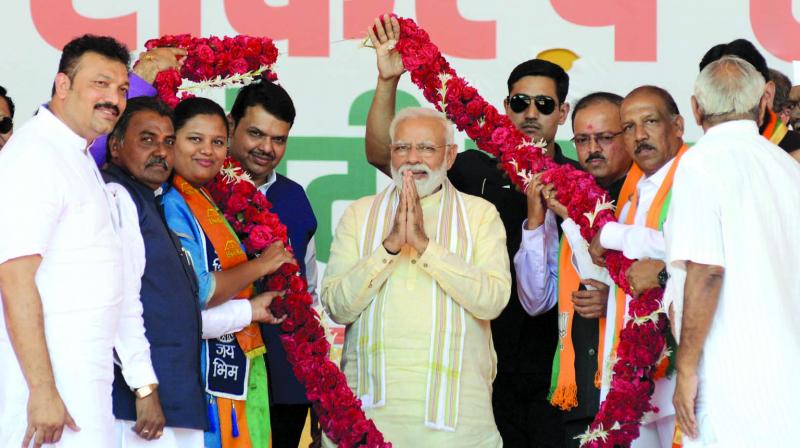 Addressing a rally at Nandurbar, Mr Modi revealed that his government had been planning something big for farmers in the country after getting elected.

Mumbai: In an attempt to woo farmers, Prime Minister Narendra Modi made two big announcements on Monday. He announced that the Bharatiya Janata Party (BJP) government is planning to provide a loan waiver to farmers of all categories after coming to power in the Lok Sabha polls. Adding to this, the government will also provide pension to farmers once the results are declared, he said.

Addressing a rally at Nandurbar, Mr Modi revealed that his government had been planning something big for farmers in the country after getting elected. “After the Modi government comes to power again, we will do away with the condition of five acres of land and provide a loan waiver to all kinds of farmers. The money of loan waiver will be deposited into farmers’ account. We are also planning to start a pension scheme for farmers in the country,” the Prime Minister said.

Saying that Nandurbar district is one of the largest producers of sugarcane, the Prime Minister slammed the Congress and the Nationalist Congress Party (NCP) alleging that their leaders deprived sugarcane farmers from the benefits of ethanol production.

“Ethanol is produced from sugarcane and the farmers would have benefited from its production as they would have got a fair price for sugarcane. Ethanol production would also have reduced the rates of petrol, created less pollution and environment protection and caused less expenditure on petrol. However, the Congress-NCP leaders deliberately kept the farmers away from ethanol production with the sole aim of profiting on account of rising petrol rates,” said Mr Modi.

“These leaders used to get kickbacks for importing fuel. If fuel imports are reduced due to ethanol blending, they fear the loss of their income,” he added.

Nandurbar is primarily known as the district of Adivasis. Mr Modi said that the Adivasis’ quota would not be tampered with and their land would be protected.