The ICG is also coordinating with the Indian Navy and local police for full surveillance of the coast. 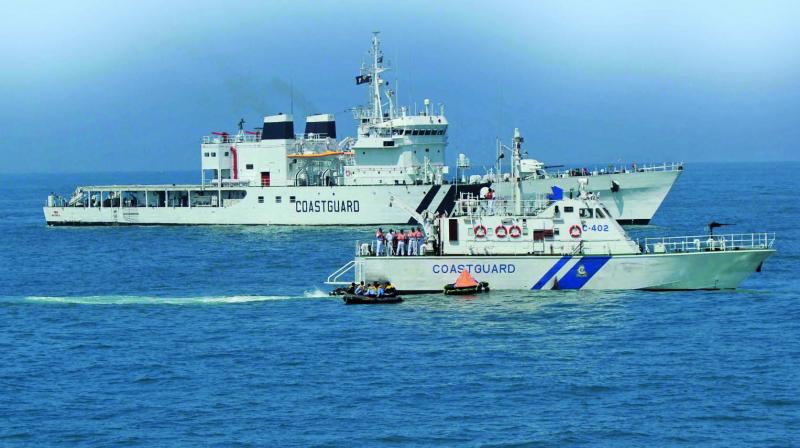 While the Naval ships hold the outermost ring (along the international waters) of the sea security, the ICG vessels patrol the deep seas.

Mumbai: The Indian Coast Guard (ICG) has been put on high alert following the terror strikes in Sri Lanka on March 21 to contain any kind of coastal infiltration. The western command of the ICG has also deployed ships and Dornier helicopters for coastal vigil and interceptors for sea surveillance.

The precarious state of coastal security on the country’s western coast came to the fore following the November 2008 terror attacks in Mumbai. In the aftermath of the attacks in Sri Lanka, agencies have fortified the western coast with the ongoing Lok Sabha elections in the country.

“We are on alert. However, details on assets deployment cannot be shared as that may compromise security,” said Vineesh Krishnan, Coast Guard headquarters (west region) spokesperson.

While the Naval ships hold the outermost ring (along the international waters) of the sea security, the ICG vessels patrol the deep seas. The offshore coasts are patrolled by local coastal police stations.

Vessel deployment has been done in order to contain any kind of infiltration by alleged terror operatives into India, officials said. The vessels from southern ICG stations at Karaikal, Mandapam and Tuticorin have been deployed off the coast in south India. Meanwhile, the western command has made deployments off the coast of western states.

The ICG is also coordinating with other coastal security agency including the Indian Navy and local police for full proof surveillance of the Indian coasts. “The Western Nav-al Command has gone up in security state and alert. The units have been deplo-yed as per the requirement and further action would be based on intel agency inputs,” said Meh-ul Karnik, Indian Navy spokesperson. The fishing vessels in southern and south-western coasts have also been cautioned from venturing into deep seas.

At least 290 people were killed and 500 others were injured in multiple explosions in churches and star hotels on Easter on March 21. A local extremist group is suspected to be behind the attack and the security forces have detained some of their alleged operatives.