An endangered species, the Olive Ridley turtles are found in the warm tropical waters of the Indian and Pacific oceans. 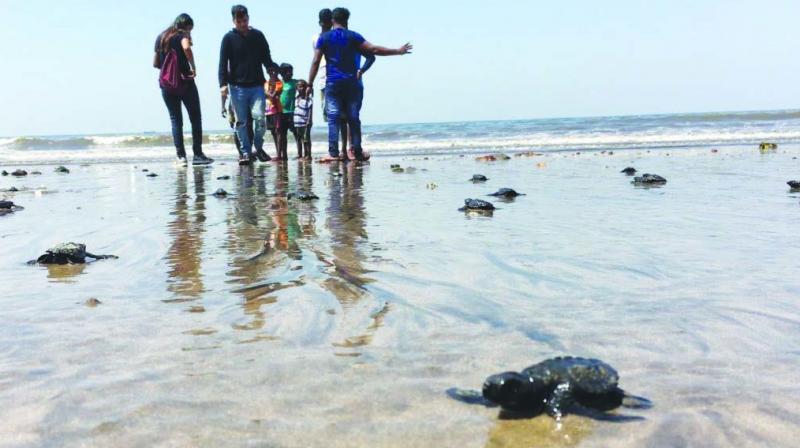 The turtles are found in the warm tropical waters of the Indian and Pacific oceans.

Mumbai: Around 80 baby Olive Ridley turtles were spotted at Versova beach on Thursday morning by Afroz Shah, an environmental lawyer, who spearheaded the massive Versova beach clean up. The baby turtles were then returned to the sea. They were last spotted at this beach 20 years ago, according to the state mangrove cell.

An endangered species, the Olive Ridley turtles are found in the warm tropical waters of the Indian and Pacific oceans. “It was a historic moment to experience. It just goes to show that constant cleaning up of beaches helps marine species. We are expecting more nesting sites on the beach. We will be sleeping in the beach tonight for a better observation,” said Mr Shah.

Officials have attributed the nesting and hatching of Olive Ridley turtles to the cleanliness drives conducted at Versova beach and the conservation efforts along the mangroves of the area. “We have not seen the hatchlings in Versova beach in last several years.

It is due to the dedicated efforts of the cleanliness drives in the beach that has resulted in creating a suitable environment for these turtles,” said Makarand Ghodke, assistant conservator of forest, state mangrove cell.

Versova beach has been cleared of 6.2 million kg of plastic during a year-long drive spearheaded by Mr Shah. The drive, which was conducted through 2017, included 116 clean-up exercises involving 50,000 volunteers, many of who were children.