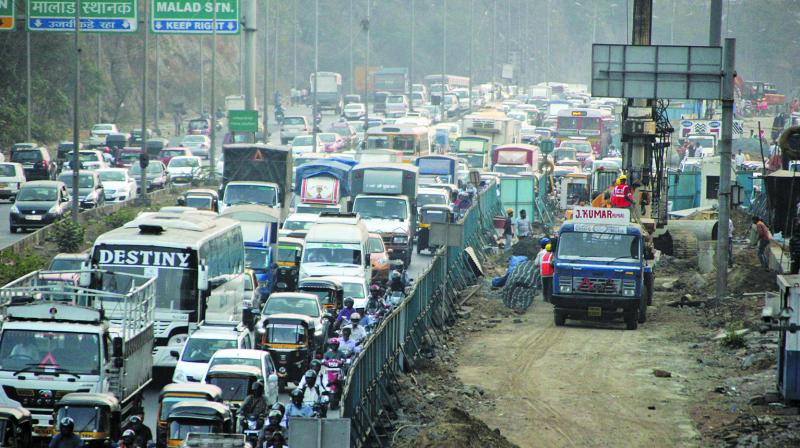 A Metro construction site at Dindoshi.

Mumbai: If things go according to the plan, the two Metro corridors in the city will be completed in record time. Judging the pace at the civil work is being carried out, the Mumbai Metropolitan Region Development Authority (MMRDA) has anticipated that the Metro works for both the Dahisar-DN Nagar Metro 2A corridor and Dahisar east-Andheri east Metro-7 corridor’s work would be completed in three years and two months setting out a national record.

The shortest time taken till now is by the Kochi Metro, which took three years and ten months to complete its 25-km-long corridor.

According to MMRDA officials currently, it has launched piers at many spots on the alignment of the Metro-2A and Metro-7 corridor and is going to launch U-girders that would be launched near Pathanwadi in Malad on Western Express Highway (WEH).

The MMRDA has proposed to construct a network of 172-km-long Metro corridors in the MMR. The contractors for Metro-2A and Metro-7 were appointed in May 2016. The civil works on both the corridor took off in full swing since October 2016.

“There have been problems related to managing traffic on the Link Road and WEH considering that these two are the parallel option for motorists plying between Dahisar and Bandra using the SV Road. However, unlike the Metro-1 corridor between Ghatkopar and Versova, we do not have much problems related to getting right of way (ROW) for the project,” said an MMRDA official.

The civil works for the both the Metro corridor is likely to finish by the end of 2018 or in early 2019. Simultaneously, the MMRDA is also going to float bids for procuring rolling stocks (coaches) for both the corridors and are expected to be ready by mid-2019. Starting from October 2016 to December 2019 the time period is around three years and two months is likely to be the shortest period till now.

Dilip Kawathkar, joint project director, MMRDA, said, “Our main focus is to be complete to Metro corridors in a minimum period and our financial budget for the year 2017-2018 is also going to be Metrocentric.”