The police found that the accused had stolen 25 two-wheelers including an Activa scooter from various places. 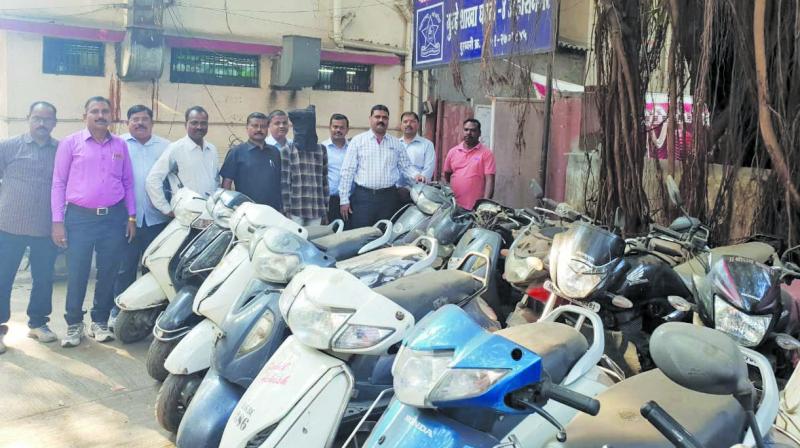 The police is scanning CCTV footage for more leads.

Mumbai: The Thane crime branch arrested five youths, in-cluding four juveniles, in connection with two wheeler thefts in the Kalyan-Badlapur belt and solved at least 21 such cases following the arrests. The police found that the accused had stolen 25 two-wheelers including an Activa scooter from various places.

Those arrested include 19-year-old Dhananjay K-umavat and his four friends who are all 16-year-old and experts in st-ealing two-wheelers pa-rked on the road. The arrests were made after police constable Jagdish Kulkarni of unit four of the crime branch at Ulh-asnagar received specific information about the accused.

The police apprehended Kumavat along with one of his underage friends while they were on the Activa scooter (MH05-CJ-1282). When the duo failed to produce relevant documents of their two-wheelers, they were questioned, leading to the revelation that they had stolen the scooter from Indira Garden in Ulhasnagar.

“Their detailed questioning led us to three more of their underage accomplices who had been operating as vehicle thieves and the latter revealed that they had stolen at least 25 two-wheelers, including 15 Activas,” said a crime branch officer.

The officials later found that the accused had kept these stolen scooters at different locations after stealing them. The investigators questioned them further and recovered the stolen two-wheelers. The police is in the process of ascertaining if they have sold any of the stolen scooters.

The accused persons are being questioned to identify other accomplices in their gang and the police is also identifying the owners of the recovered vehicles. The juveniles have been sent to a children’s home whereas Kumavat has been remanded in police custody till Sunday for further investigation.

A case of motor vehicle theft has been registered against the accused persons and the police is also scanning the CCTV camera footage for more leads in the case.