Failing to carry out measures after Kinara fire, it will seek gas suppliers’ help. 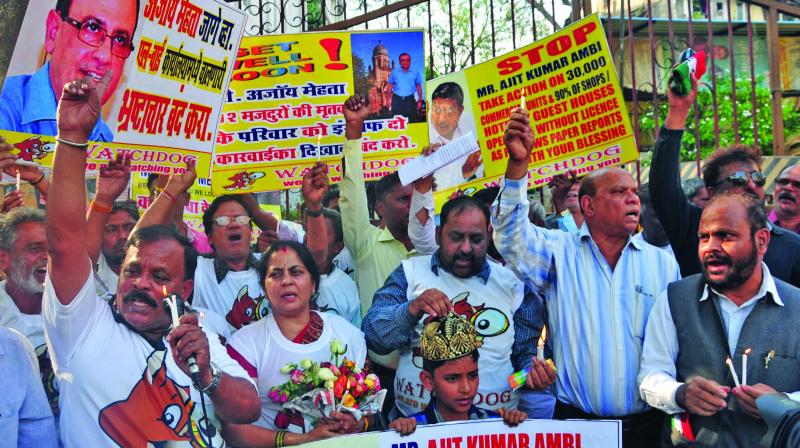 Parents and relatives of Sakinaka fire victims against BMC in L word in Kurla.

Mumbai: In order to sharpen its crackdown on industrial units that carry out illegal cooking activities, the Brihanmumbai Municipal Corporation’s (BMC) L ward has decided to seek help from LPG gas suppliers like Bharat Petroleum Company Limited for the names of customers to whom the gas has been supplied.

This is not the first time the BMC has moved to combat fire hazards. In 2015, the civic body had promised a slew of measures in the wake of the fire that claimed the lives seven students and an engineer in a Kurla eatery.

However, none of these measures we’re strictly implemented.

The BMC has now formed teams, which will include health and licence officers, who will begin the survey of industrial units in the ward. This development comes in the wake of a fire that killed 12 workers at a farsan shop in the ward on Monday. The blaze was sparked off by a short circuit but the situation was exacerbated by LPG cylinders, that had been procured and stocked illegally by the owner.

“We will ask the companies to share the list of customers and will compare it with our list of people to whom the BMC had given permission to conduct cooking activities. This will enable us to crack down on defaulters quickly,” said Ajitkumar Ambi, assistant municipal commissioner of L ward.

However, the BMC has not decided to take action against those who sell gas cylinders illegally. “There are people who buy cylinders under residential permits and use it for commercial bases. In such cases, we will seize the cylinder and sent it back to the company,” said Bharat Marathe, deputy municipal commissioner of the zone 5.

As of 2017, the ward has 60,000 new registrations, in addition to this, it receives 1,000 applications per month. Each inspector is expected to check on 200 new registrations the ward gets. Meanwhile, on Thursday, members of NGO Watchdog Founda-tion along with the parents of the deceased labourers, protested in front of the BMC ward office in Kurla, demanding justice and the arrest of those eallegedly responsible for the incident.