The fire engulfed the electric wiring, some installations, household articles, LPG cylinders and other valuables. 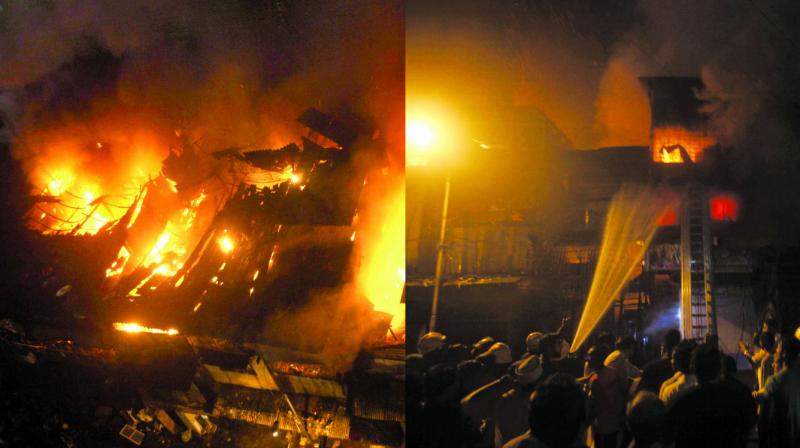 The fire rages at Madanpura’s Sankli Street in Byculla, and firemen try and douse the flames.

Mumbai: A fire broke out on Tuesday night at Madanpura's Sankli Street in Byculla, destroying up to 60 shanties and injuring two persons including a fireman who was involved in dousing it. The hutments housed the manufacturing units of bags, footwear and scrap godowns. The fire took place at 10.20 pm on Tuesday night where nine hoselines of 14 fire tenders were rushed to the spot.

The blaze got escalated due to blast in 3 LPG cylinders besides, leakage was also found in two LPG cylinders, which were later handed over to a gas agency.

“The fire affected 50 to 60 structures on the ground-floor, and three floors above it in the area having various footwear and bag manufacturing units, scrap godowns, shops and residential structures. A few temporary structures also collapsed due to the blaze,” Rahangdale said.

The fire engulfed the electric wiring, some installations, household articles, LPG cylinders and other valuables. There was also nuisance caused by public and vehicles parked on both sides of the road that posed as major difficulties for the fire personnel to reach the spot and begin curbing the fire at Madanpura.

The fire also caused a few temporary structures to collapse. The fire was extinguished around 3 in the morning on Tuesday.

In the mishap, fireman Ashok Bane sustained head injury while a local resident, Shiba Shah, got suffocated due to the smoke. Both of them were admitted in the civic-run Nair Hospital by an Emergency Medical Service in Mumbai Central.