Last month, a 29-year-old woman gave birth at the ORC at Thane railway station while a baby boy was delivered at the same station in April this year. 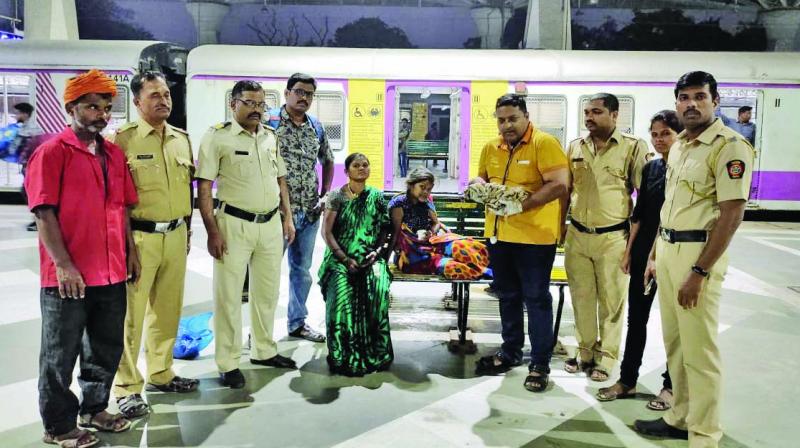 Manisha Kale and her infant at Panvel station.

Mumbai: An 18-year-old successfully delivered a baby girl at the bustling Panvel station on Thursday morning thanks to the timely intervention of doctors and railway staff members of the ‘One-Rupee Clinic’ (ORC), who came to her rescue immediately. The mother, Manisha Kale, was travelling from Nerul to Panvel when she went into labour.

Ms Kale’s baby is said to be healthy and has been shifted to a primary healthcare centre in Panvel.

The teenager, a Panvel resident, had gone to a privately run clinic at Nerul but — due to the unavailability of special paediatric and maternal caregivers — was referred back to Panvel. She, however, started experiencing labour pains in transit. After her train pulled into the station, Ms Kale’s co-passengers raised an alarm following which doctors and staff members of Railways’ ORC promptly pitched in.

Talking to The Asian Age, Dr Rahul Ghule, CEO of ORC, said, “Such facilities should be available at each and every railway station, as we do not have any medical emergency clinic. Our Panvel centre’s night in-charge Dr Vishal Vani acted at the appointed time as he had received a call from the station manager.”

Dr Gule added, “Our employees and the railway staff and they managed to successfully lend a hand during golden-hour to the passengers. This is the eleventh instance when the
ORC has proved its mettle by helping expecting female commuters and people requiring emergency medical aid in the city’s local trains.”

Last month, a 29-year-old woman gave birth at the ORC at Thane railway station while a baby boy was delivered at the same station in April this year.

ORCs were set up at various railway stations in the state in 2017 to assist passengers in case of medical emergencies. The Central Railway (CR) along with a Mumbai-based medical firm established the 24x7

ORC following a Bombay high court order. The consultation fee at these clinics, as their name suggests, is `1; a blood pressure check-up is done for free. The charges for other tests are also minimal.

Some activists, however, feel that Railways can do much more to ensure the well-being of commuters.

Stating that various victims had lost their lives as golden hour treatment was not available at railway stations, railway activist Sameer Zaveri said, “We still do not have any advanced healthcare facilities at railway stations.”