It is suspected that the dog died of heart attack, Dr Ankita Pathak said. 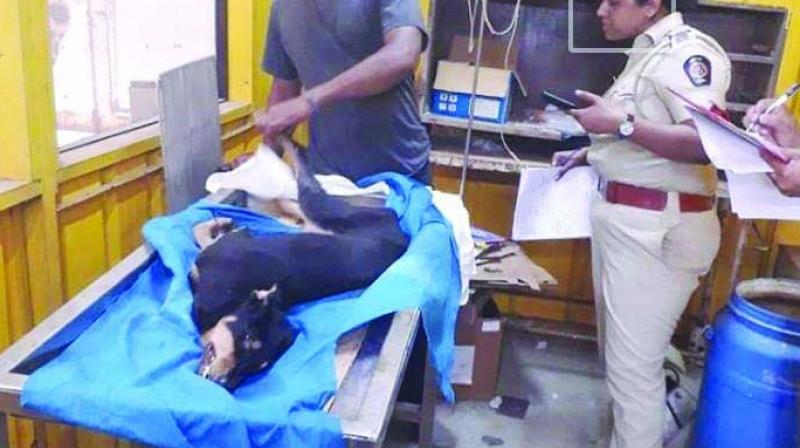 The injured dog was bleeding profusely.

Mumbai: The male dog that was allegedly tortured by four men in Malwani area of Malad, succumbed to injuries in the wee hours of Wednesday. The dog was in extreme pain and was being treated for its injuries. The Malwani police station did a panchnama of the dog’s body and his remains have been sent for post mortem.

The Asian Age had on Monday reported that the injured dog was bleeding profusely when it was spotted by a local resident at Malwani, after which she took him to the veterinary doctor at the NGO- Animals Matter To Me.

“On Wednesday morning, we found the dog already dead. It is suspected that the dog died of heart attack due to shock in the mid night. He was in extreme pain and was wailing throughout the day even when we had given him pain-killers. We had also put him on fluids and saline, but even after giving him medicines, his pain was not reducing,” said Dr Ankita Pathak, vet and founder of AMTM.

Around 7pm, the dog’s body was sent to the Animals Hospital in Parel. The post mortem of the body will be conducted on Thursday.

Resident Sudha Fernandes had also filed First Information Report (FIR) under section 11 (a), (d) and (i) of The Prevention of Cruelty To Animals Act, 1960 at the Malwani Police station.

“We have filed the FIR based on the injuries occurred to the dog and the resident’s narration,” said Deepak Phatangare, senior police inspector, Malwani police station. He also said that the dog has not been raped. However, the FIR states that the four men had performed unnatural act with the dog and injured him.

The resident had stated that four drunken men allegedly tortured the dog sexually at around 2 am on Monday, as per the account of an auto-rickshaw driver that witnessed the incident.