CR officials said that demands to rename Dadar station would be forwarded to the CR headquarters. 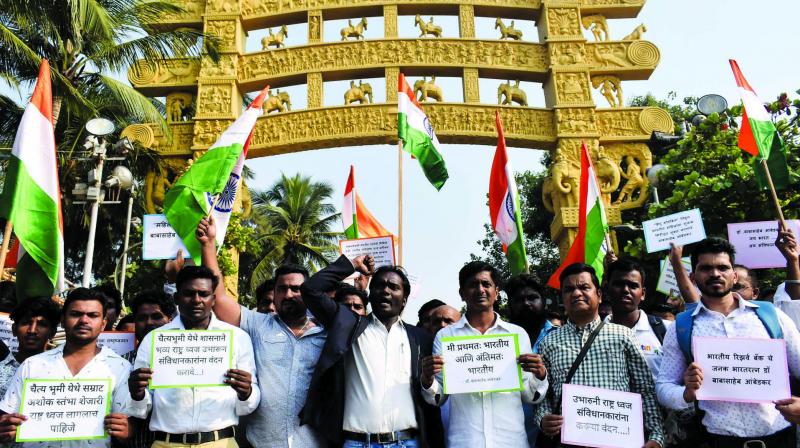 Mumbai: Just ahead of the 63rd death anniversary (Mahaparinirvan Diwas) of Dr Babasaheb Ambedkar, Dalit outfits have again demanded that Dadar railway station be renamed after Dr Ambedkar. The Bhim Army of Maharashtra has even threatened not to allow chief minister Devendra Fadnavis and other BJP ministers enter Chaityabhoomi on December 6 if the station is not rechristened after Dr Ambedkar.

A delegation led by Bhim Army chief Ashok Kamble Wednesday met the senior divisional commercial manager of the Mumbai division, Narendar Panwar, over the same issue and handed over a letter to him.

Mr Kamble said that while the government had renamed Elphinstone Road railway station as Prabhadevi and another station along the Western Railway (WR) after Lord Ram as Ram Mandir, it had failed to rename Dadar station after Dr Ambedkar.

Mr Kamble claimed that the senior DCM had assured the delegation that he would convey their demands to his higher-ups and that they would try and rename the station accordingly. However, CR officials said that demands to rename Dadar station would be forwarded to the CR headquarters.

Mr Kamble claimed that Dalit outfits had been demanding that Dadar railway station be renamed after Dr Ambedkar for the past two decades however their pleas had fallen on deaf ears.

The Bhim Army chief warned that if the government failed to rechristen Dadar station before the coming Mahaparinirvan Diwas, the Bhim Army would not allow the CM and his cabinet colleagues enter Chaityabhoomi on December 6.