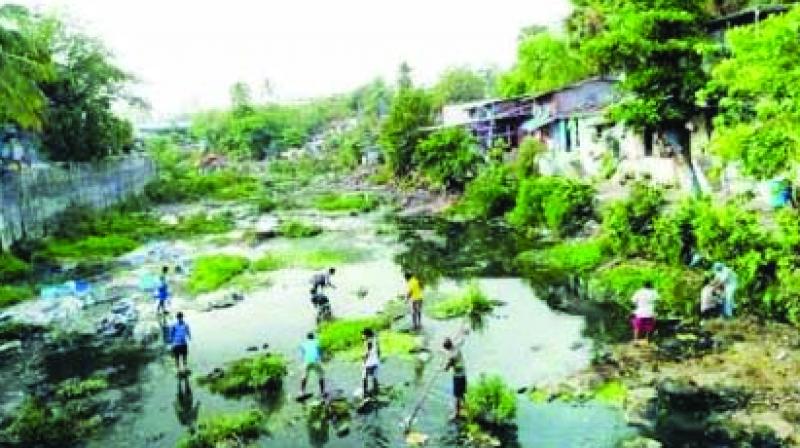 File picture of trash being removed from Dahisar river.

Mumbai: After an inspection of the Dahisar river by minister of state for urban development, Ranjit Patil, on Friday, the Brihanmumbai Municipal Corporation (BMC) has been directed to work on the proposal of three decentralised Sewage Treatment Plants (STPs) and related activities for the river.

Mr Patil visited the river site along with civic officials and members of “River March”, a citizens’ group working towards rejuvenation of Mumbai’s rivers.

Gopal Jhaveri, a member of River March, said, “The tabelas along Western Express Highway are constantly dumping animal dung and carcasses that are clogging the river. Two other major issues with the river are sewage water in Kulupwadi and the Dhobhighat area from where empty detergent packets are dumped into the river, and hospital and hotel clothes are washed in polluted water. As Dhobighat and the tabelas cannot be removed, we asked for a sewage treatment plant for the river.  The sewage water coming from Kulupwadi and Devipada should be treated before it enters the river. We have proposed the STPs as a three-way solution.”

BMC officials said that this proposal will not be included in the STPs that have been proposed for seven zones in the city. Atul Rao, assistant commissioner, R/central ward, said, “We have forwarded the proposal to higher authorities in the BMC. The Storm Water Department and Sewage Department will be working on provision of funds. We hope the proposal gets finalised soon.”Once the proposal is approved, project work will begin in May 2018.

Mr Patil also directed that the height of the bridge near Krishnanagar in Borivali be raised to prevent flooding during monsoons. A check dam has also been proposed at a distance of 1 km down the river. “The gates at the dam will open before monsoons and will remain so throughout the rainy season to retain ground water,” said Mr Rao.