Mr Parrikar said the ship was the first to have a specially integrated underwater ‘Kavach’ decoy system. 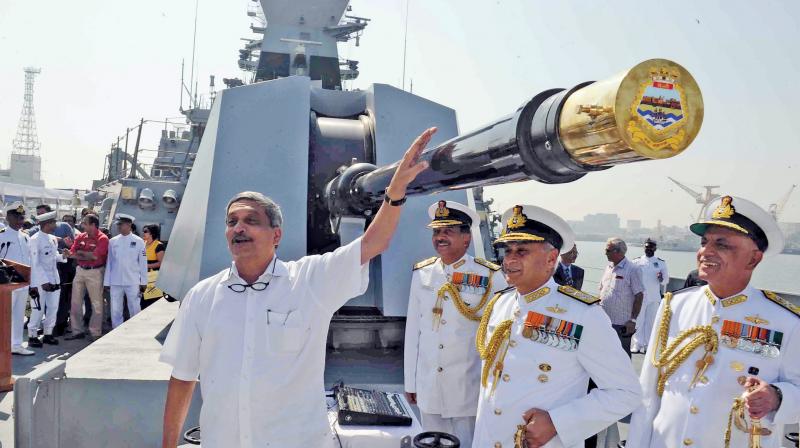 Mumbai: The government on Monday said Chandu Chavan, the Indian soldier who was captured by Pakistan after he inadvertently crossed the Line of Control, is safe and alive and the talks for his safe return were on.

Defence minister Manohar Parrikar, while addressing the Mumbai media at the time of commissioning of the Kolkata class destroyer INS Chennai said, “Frequent ceasefire violations by Pakistan are calculated moves, and it is completely influenced by Pakistani politics. While our message is clear that we will not be aggressive unnecessarily, we will take action if it is needed.”

Mr Parrikar said while talking to the media that when two neighbourhood countries are friendly it always helps, but “we don’t want this at the cost of national security”.

Replying to a query on National Conference leader Farooq Abdulla claiming that demonetisation of Rs 500 and Rs 1,000 had not made any impact on stone-pelting incidents in the valley, Mr Parrikar reiterated that the series of pelting incidents had stopped.

Describing INS Chennai, Mr Parrikar said the ship was the first to have a specially integrated underwater ‘Kavach’ decoy system that could change the direction of a missile or a torpedo fired at it by an enemy ship.

INS Chennai was constructed at the Mazagon Dock Limited (MDL), Mumbai. Commenting on the indigenous Light Combat Helicopter (LCH) developed by Hindustan Aeronautics Limited (HAL), Mr Parrikar said both the Indian Air Force and the Army had approved its induction. The whole cost of the project was Rs 50,000 crore, and in the initial stage it would get 15 aircrafts.

The defence ministry is also planning to purchase helicopters for the Navy in the next two years, said Mr Parrikar.  Chief of the Naval Staff, Admiral Sunil Lanba, was also present on the occasion. “INS Chennai will keep India’s rich maritime tradition alive,” he said. Rear Admiral R.K. Sherawat (Retd) CMD MDL, while commenting on the commissioning, said, “Whatever has been done has been done with the support of the defence minister.”