The service started from Karambeli near Vapi, Gujarat, to Karambeli in Karnataka. 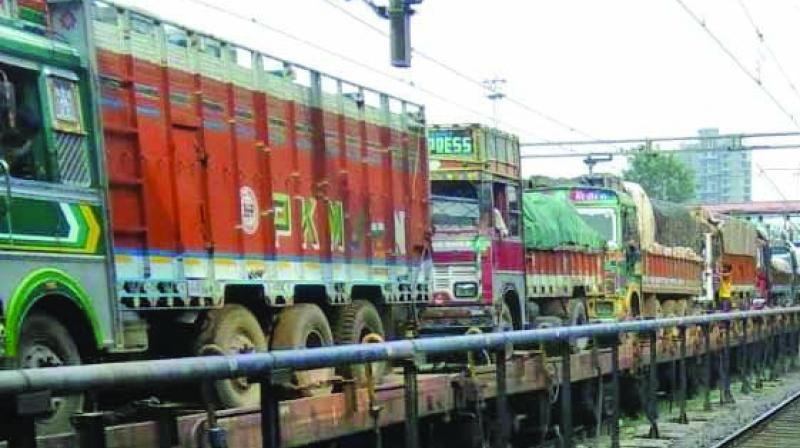 Mumbai: Western Railway (WR) has begun its first RoRo (Roll on Roll off) rake service started from Karambeli near Vapi in Gujarat to Karnataka on Thursday. The RoRo service will reduce pollution as well as fuel consumption. The RoRo rake has moved from Konkan railway’s Surathkal goods shed and is likely to reach the Karambeli good sheds by late Friday evening.

It consists of 25 trucks loaded on the rake with an approximate haulage charge of Rs 1.81 lakh. The rake will be unloaded at Karambeli and the reloaded with trucks from Karambeli goods shed, spanning a total distance of 290 kms. According to a senior WR official, “A maximum of 50 trucks will be loaded in a rake. We can earn Rs 3.58 lakh per rake from Karambeli to Roha.”

The chief public relations officer of WR, Ravinder Bhakar said that they had received a proposal from the Konkan Railway Corporation Ltd. (KRCL) to operate RoRo services from Karambeli to Roha. It is an attempt to seamlessly transport commodities from road to rail as well as provide an environment-friendly transport system. Once traffic is diverted to the western dedicated freight corridor, WR will generate more capacity to move RoRo services. It will be the first of its kind on Indian Railways, the ultimate intermodal transport on the existing track.

Earlier, RoRo services were cleared up to Boisar. Later, a trial run was successfully conducted between Koladand Karambeli. The KRCL is utilising modified BOXN/BRN wagons with standard carrying capacity as the conventional flat wagons cannot be used for operating RoRo services.