Police stations have been asked to step up their surveillance on noise pollution in light of court order. 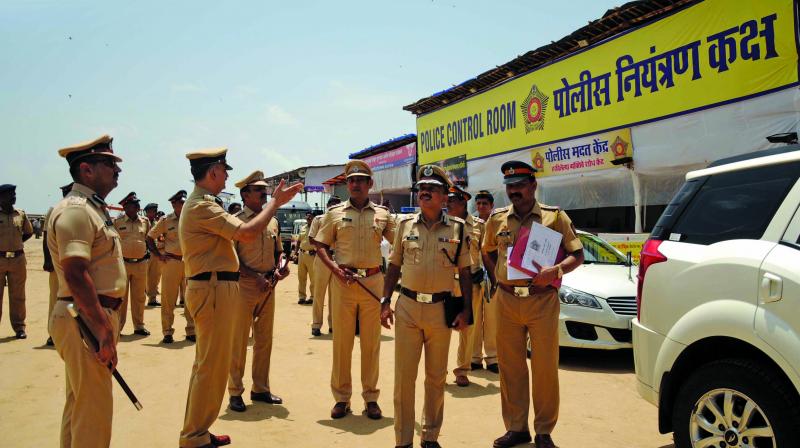 Mumbai: The city police will throw a security cover of over 50,000 personnel and will press ‘drones’ into service for aerial surveillance of processions during Ganesh visarjan on Sunday. The police have erected five control rooms for real-time monitoring of CCTV camera footage and for better coordination with the main control at the police headquarters. While the police said there was no specific security related alerts, focus has been laid on anti-sabotage and anti-terror measures. Sniffer teams and bomb squads will be deployed at important places.

In light of the Bombay high court order, police stations have been asked to keep a tab on loud music. The police have already registered 103 cases of noise pollution during the Ganpati festival.

The city will see sizeable presence of local police along with the 12 companies of the state reserve police, the rapid action force, the Quick Response Team, Home Guards and civil defence. The police said that special arrangements would be put in place for the Lalbaugcha Raja, which sees heavy footfall.

“Drones will be keeping a tab on surveillance and teams will continue to monitor the footage at the control rooms on real time. A dedicated team of 550 personnel and 80 officers has been formed specially for Lalbaugcha Raja,” said Manjunath Singe, deputy commissioner and Mumbai police spokesperson.

There are over 5000 CCTV cameras put up in Mumbai, which will be constantly monitored. Citing over crowding on all roads and specially the 162 visarjan spots, the police has formed several teams of plain clothed personnel to keep a watch on women and children. These teams will avert any kind of crimes targeting them. “First aid centres at multiple spots have also been set up for people in case of emergencies," added Singe.

In order to avoid traffic chaos, 3,161 traffic police along with 500 wardens will be out on the streets. The police will shut down 53 roads whereas 99 other roads will see curbs on heavy vehicle movement.

“We also request citizens to dial 100 or tweet for any help or complaints. Confirm with the police about anything they hear in order to curtail any spread of rumour,” Singe said.

Police stations have been asked to step up their surveillance on noise pollution in light of court order.

During Ganpati, the police have already 103 cases on mandals pertaining to loud music and other noise related violations.