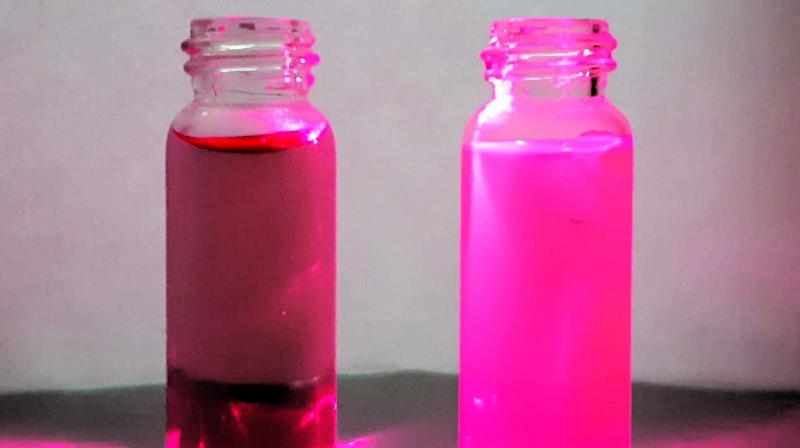 Mumbai: A research team from IIT-Bombay has developed a system that could help in the detection of cancerous cells that grow inside the body in about a minute. These cells, which are technically difficult to detect in the early stages, can be detected or rather ‘sniffed’ using a direct (label-free) technique called Raman spectroscopy to detect specific substances in single molecular levels. Interestingly, this can be used to monitor air pollution levels or to detect explosives.

After a series of study, Prof. Chandramouli Subramaniam who is the associate professor of the department of chemistry, IIT-B and his research team, developed the ‘solution’, which detects molecules that are present in the breath of a person.

Mr Subramaniam said, “People do not realise they have chances of developing lung cancer unless obvious and visible symptoms are shown. However, by then, the case gets serious and complicated. Through this system, even the slightest particle is detected due to its high sensitivity.”

In this pattern, the person is asked to exhale into the ‘solution’, where the present molecules in the breath interact with the nanoparticles present in the solution. Within a minute, the system can help detect chemicals in single molecular levels. It is funded by the department of Science and Technology’s Nano-mission programme.

The IIT-B have also come up with na idea of making a ‘cage’ of nanoparticles to trap the analytes. A method called ‘thermodiffusion’ at a nanometer level to create nanoparticles assembles into which they observe the analytes get trapped and gives a light signal that is very high.

Through this new solution it can easily detect substances in any form – gaseous, liquid or solid. Liquid or gases are detected by mixing them with the Soret colloid and then carrying out Raman spectroscopy.

As of now, the team is working on ‘portable spectrometer’ where the result of the solution will be ‘digitally displayed’. Apart from lung cancer detection, this device can ‘sniff’ air quality where harmful air or its intensity is monitored. Also, it can detect explosives. According to the professor, the team is in talks with an Indian company to develop a handheld or portable Raman spectrometer.