The smuggling syndicate was being operated by persons based in Delhi, who were indulging in smuggling of multi-brand high-end foreign-made cigarettes. 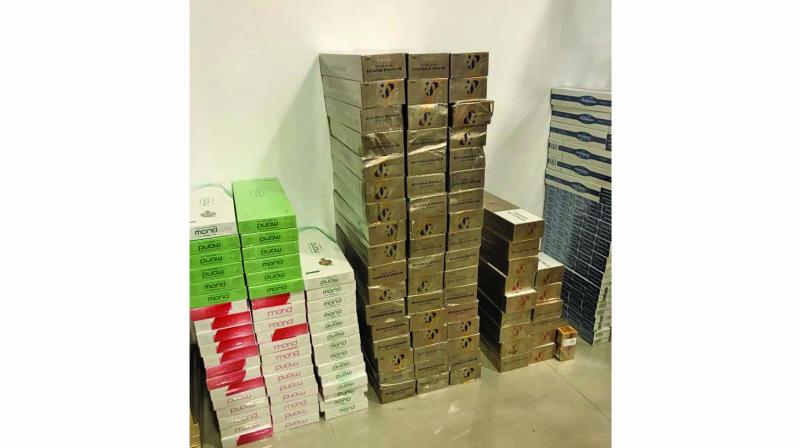 Mumbai: The Directorate of Revenue Intelligence (DRI) has busted a distribution hub for smuggled cigarettes in south Mumbai and seized items worth Rs 1 crore following raids at half-a-dozen places.

The smuggling syndicate was being operated by persons based in Delhi, who were indulging in smuggling of multi-brand high-end foreign-made cigarettes. The gang had made Mumbai their distribution hub for supplying smuggled cigarettes across the country, DRI officials said.

The officials raided two locations and seized 7.32 lakh cigarettes of brands including Marlboro, Benson & Hedges, More, Rothmans and Gudang Garam along with Rs 2.31 crore in cash. The sticks are of 75mm and above, the officials said.

“We have raided locations of two major distributors who have at least six godowns each. These storehouses are in the populated and sensitive market area of Musafirkhana. It was a well-planned multi-locational operation,” said a DRI officer.

The investigators arrested two persons, who are suspected to be operators of the warehouses. The officials are probing the larger smuggling ring and how it reached city limits, unhindered. Preliminary investigation has revealed that the consignments were sent in containers as goods and concealed beneath other items.

The cigarette packets were found to be printed with statutory warnings in the English and Arabic languages, indicating that they were basically meant for the Gulf countries’ market. In most of the cases, the smugglers preferred to smuggle in cigarettes from UAE, Malaysia and Singapore, a DRI officer said.

A case has been registered against the two distributors and further investigation is underway.