Prepare to contest all 288 seats: BJP to party cadres 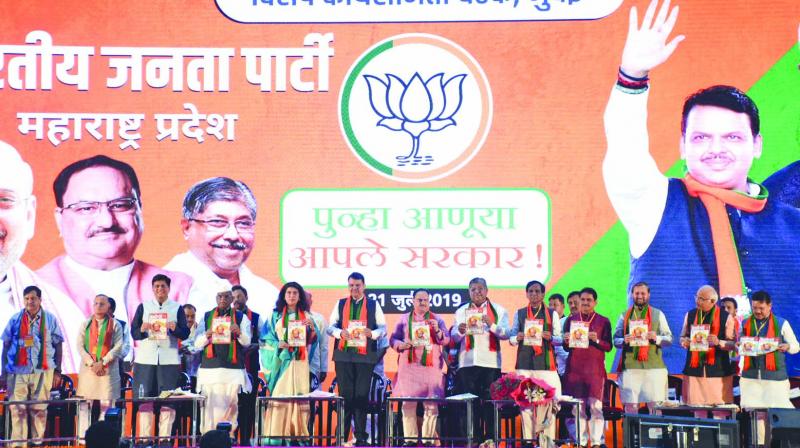 Chief minister Devendra Fadnavis and other senior BJP leaders at the executive committee meet on Sunday.

Mumbai: The Bharatiya Janata Party on Sunday indicated that the party would contest all the Assembly seats in the upcoming state election.

BJP's national general secretary in-charge of Maharashtra, Saroj Pandey, on Sunday asked cadres to prepare to contest all the 288 seats in the Assembly election.

The state BJP also came out with a slogan, “Abki baar, 220 paar”, ahead of the election. While addressing party workers in Mumbai, Ms Pandey took a leaf out out of ancient philosopher Chanakya's book and said, “The Opposition is nowhere. Even Chanakya Niti says that one must attack the Opposition when it is weak. We will have to attack the Opposition so that it won't be able to return to the battle field."

The newly appointed Maharashtra state BJP chief Chandrakant Patil added that the party will have to prepare for 288 seats to also help their alliance partners win their seats.

While reiterating that the next chief minister would be from her party, Ms Pandey urged the workers to avoid speculating over the alliance between the BJP and the Shiv Sena. Mr Patil added that party workers must leave the seat-sharing talks to chief minister Devendra Fadnavis and BJP chief Amit Shah.

The state in-charge also directed party workers to focus on the booth, claiming that winning them will help win the Assembly election. We are determined to retain the 52 per cent vote share that the party garnered in the recently concluded Lok Sabha election, Ms Pandey said.

“Let us strengthen the BJP at the booth-level in the state. Even if our allies contest particular seats, our booth structure will ensure our victory," said Mr Patil.

The senior Maharashtra BJP leader and a noted Maratha face also announced that he would prioritise qualitative improvement as well as expansion of the party.