In solidarity with families of lynch victims: Naseeruddin Shah

At the convention, family members of victims expressed solidarity and pledged to unite against hate crimes. 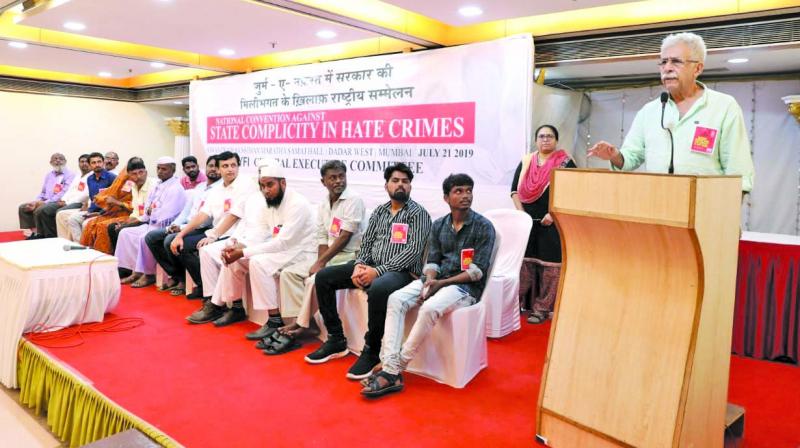 Actor Naseeruddin Shah at the event in Dadar on Sunday.

Mumbai: Veteran actor Naseeruddin Shah on Sunday voiced his solidarity for the families of victims who have lost their lives in incidents of mob lynching and religious hatred in the last five years.

Speaking at the National Convention against State Complicity in Hate Crimes, organised by the Democratic Youth Federation of India, Mr Shah said, “What I have faced is nothing compared to the families who have lost their loved ones in mob lynching and religious hatred.”

The Convention, which was held at a prominent hall in Dadar, brought several family members of those who fell victim to religion-fuelled hate crimes.

Mr Shah also met the families of various victims and expressed his sympathies. “I feel proud to be part of this program. I was here to listen to people who faced these heart-wrenching incidents,” he added.

It may be recalled that Mr Shah, a Film and Television Institute of India (FTII) graduate, was trolled in December 2018 when he claimed that he was worried about the future of his children in India.

“I am worried for my kids...if tomorrow, a mob surrounds them and asks which religion they belong to, they will have no answer,” he had said in a video in December 2018.

At the convention, family members of victims expressed solidarity and pledged to unite against hate crimes.

Satyabhama a neo-Buddhist who was stripped down and paraded through the village said, “The society doesn’t accept if someone from the lower caste fights for his or her rights. I am worried about my children as I live alone in the village.”

Mohammed Riyaz, another participant at the event, termed such brutal and inhuman attacks as ‘government sponsored’ attacks. He also said that such incidents are a government ploy to divide people and divert their attention from the issues of day-to-day life.