The incident took place at around 9.30 am when the labourers were travelling towards Mumbai on the Nashik-Mumbai highway. 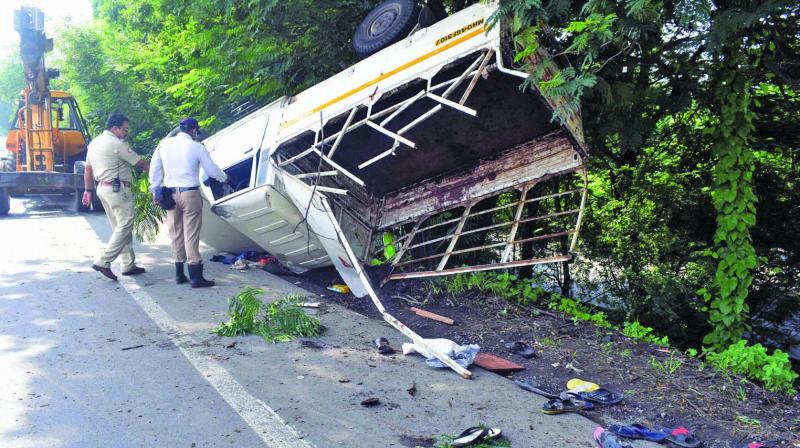 The police inspects the tempo on the highway on Sunday. (Photo: DEEPAK KURKUNDE)

Mumbai: One person died and 18 others were injured after a tempo, carrying a tree-pruning team, turned turtle in Thane on Sunday. The police said that the accident took place after the brakes of tempo failed in Saket area however police suspect that the driver was drunk.

The incident took place at around 9.30 am when the labourers were travelling towards Mumbai on the Nashik-Mumbai highway. The accident took place on the Saket Bridge after the driver lost control of the tempo and met with the accident.

“The tempo rammed into a tree and turned turtle in which 18 persons were injured. They were rushed to Civil Hospital for treatment. The incident is being probed further and as per preliminary investigation, the absconding driver seemed to be drunk,” said an officer of Kapurbavdi police station.

One of the deceased occupants was identified as Aalam Mohammad Shaikh (18), a resident of Mumbra. The police said that 19 occupants are undergoing treatment at the hospital and police are in the process of tracking down the driver.

The medical test would however fail to detect alcohol after 24 hours in case the accused is not held. The police are relying on the witness statements and are gathering further evidence to corroborate the same.

The police has filed a case of drunk driving as per the provisions of the IPC and the Motor Vehicle act against the driver and further probe is underway.