1 dies, 2 hurt as fire breaks out in building near Taj Hotel 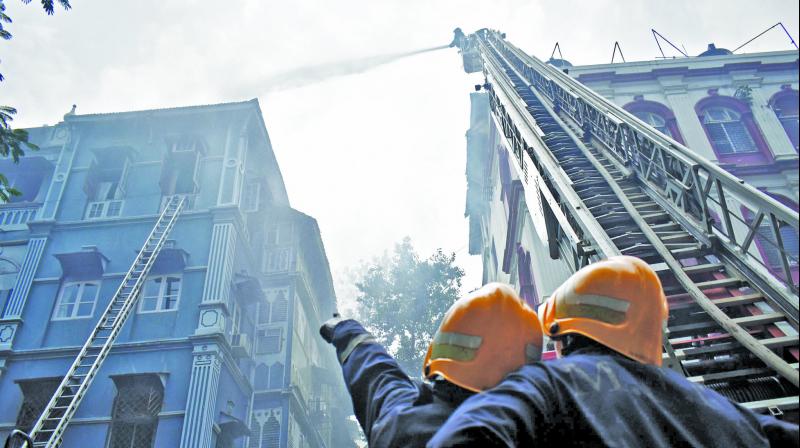 Mumbai: One person was killed and two others, including a fireman, were injured after a major fire broke out on the third floor of a four-storey residential building behind the iconic Taj Mahal Hotel in Colaba on Sunday. In all, 14 people were rescued.

The Mumbai Fire Brigade (MFB) received a call about the blaze at Churchill Chamber, a heritage structure on Merryweather Road, at 12.17 pm after smoke began engulfing the building.

Four fire engines, four jumbo water tankers and two turntable ladders were rushed to the spot. The blaze was eventually extinguished at 4 pm. However, owing to the building’s vintage design, most of its windows lack grills and sliding glasses, which help firemen enter quickly. Six people were stuck on the floor where the fire had broken out and one of them, Yusuf Punawala (50), who experienc-ed ‘critical suffocation’, was admitted to the ICU of Bombay Hospital. He was later said to be out of danger.

Later, on being informed by residents said a resident was missing, firemen entered the worst-hit area and found Shyam Aiyar, who was later declared dead by GT Hospital.

“The deceased had gone to the third floor to douse the blaze. However, he got trapped,” said MFB’s chief fire officer, P.S. Rahangdale.

The injured fireman, Burmal Patil (29), was administered treatment for suffocation in an ambulance and discharged.