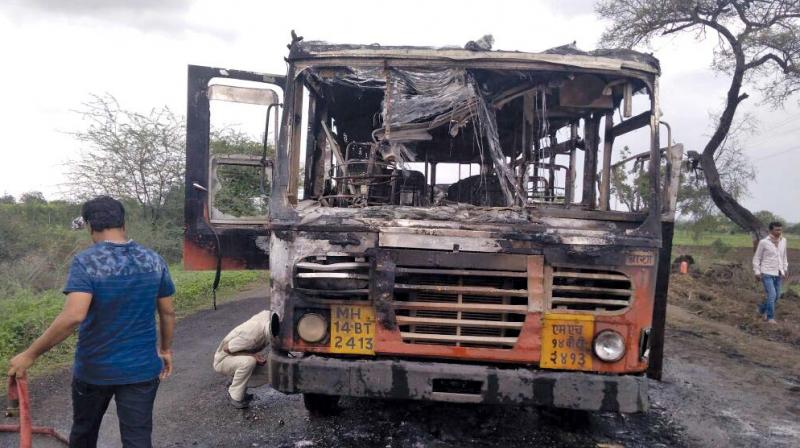 Mumbai: The state-wide protest called by the Maratha Kranti Morcha over reservation took a violent turn on Saturday as protesters burned down a state transport bus in Uttar Solapur tehsil while agitators held ‘rasta roko’ stirs in Aurangabad and Solapur. The latter district also witnessed two incidents of stone pelting on ST buses. The state government had assured the community that 16 per cent of government posts would be kept vacant until the Bombay high court announces its verdict on the Maratha reservation issue, but protesters want the government to take a decision immediately.

Uttar Solapur and Pandharpur tehsils of Solapur district in south Maharashtra have been hotbeds of protest, with Maratha agitators warning the state government that they would not allow chief minister Devendra Fadnavis to set foot in the famous pilgrimage town of Pandharpur — where he performs puja every year at the Vithoba Temple — on Monday.

Meanwhile, protesters held a thiyya andolan (sit-in) at Solapur’s Sambhaji Chowk and Aurangabad’s Kranti Chowk, demanding that 16 per cent of posts should be reserved for Maratha youths during the state government’s upcoming recruitment drive where almost 72,000 candidates will be selected for all departments.

The Maratha Kranti Morcha — which had taken to the streets from August 2016 to December 2016 over its range of issues including reservation and organised 58 mammoth rallies in almost every major city in the state — held its first recent rally on the issue in Tuljapur, Osmanabad two weeks ago. Since then, community members had been staging small protests across the state.

In the recently-concluded legislative session, Opposition members raised the issue and expressed fears about the Maratha youth turning violent over reservation. In response to them, Mr Fadnavis had said on the floor of the House, “There will be recruitment for 72,000 posts. But we will keep 16 per cent posts vacant for the Maratha community until the Bombay high court gives its verdict. So, the recruitment of Maratha youth will be just.”