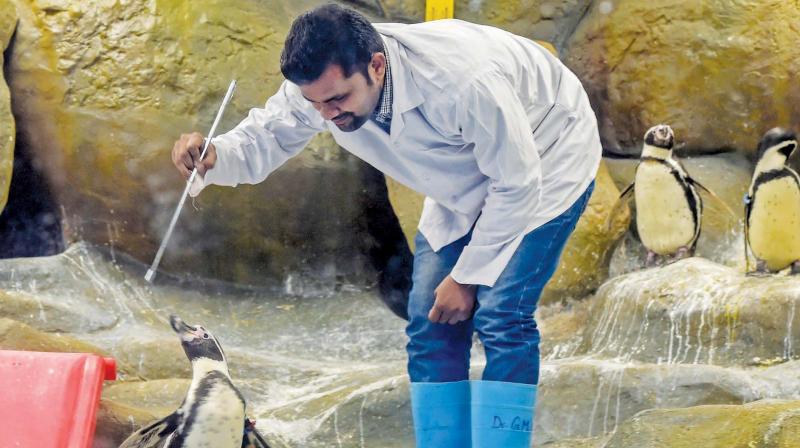 The zoo authorities celebrated Molt’s birthday by cutting a cake. The penguin viewing area was decorated with balloons and birthday signages.

Mumbai: Molt, the youngest penguin at the Byculla Zoo, was the cynosure of all eyes on Saturday as the Byculla Zoo celebrated his third birthday. A special seven-minute film showcasing his activities was made to commemorate the occasion. It kept the zoo visitors entertained all day long.

The zoo authorities celebrated Molt’s birthday by cutting a cake. The penguin viewing area was decorated with balloons and birthday signages. A special screen was put up wherein Molt’s acts like his gestures, walk, dipping into water was showcased.

“To enable visitors to identify Molt among other penguins, a red band was tied on his left wing. It made him a centre of attraction of all,” said zoo officials.

“Molt is the most active and playful among them. We did not disturb his daily routine while celebrating his birthday,” said a zoo official.

According to zoo authorities, penguin’s date of birth was informed to them during its transfer to the Byculla zoo. Accordingly, birthdays of penguins are celebrated at the zoo. We are planning to make videos of other penguins on their birthdays, said the official.

Though he is youngest of all, Molt is also playing the role of father-to-be. On July 5, five-year-old Flipper laid an egg after having mated with Molt. Incidentally Flipper is the oldest among all the seven penguins at Byculla zoo. Penguin eggs normally take 40 days to hatch. In penguins, both the male and female incubate the eggs turn by turn.