One killed in fire on Navy warship

Blaze erupted on the 2nd deck of the ship ‘Visakhapatnam’. 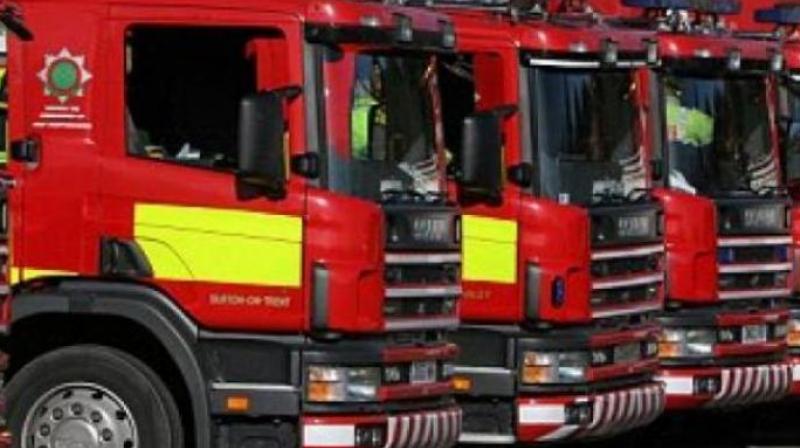 The fire broke at 4 pm during grinding operations.

Mumbai: A major fire broke out on a 163-metre long under construction warship — Visakhapatnam at Mazgaon dock on Friday evening killing a labourer. The fire was brought under cover at 11.03 pm, informed chief fire officer of Mumbai Fire Brigade (MFB), P.S. Rahangdale.

The fire broke out at 4 pm during grinding operations in the tank.

The MFB sources said they received a call about the fire at 5.44 pm and at around 7.25 pm,  it was classified as Level three, which indicated it was serious. Eight fire engines, six jumbo water tankers and one quick response vehicle were pressed into service.

The blaze erupted on the second deck of the ship and was confined to the second and third decks.

The 23-year-old victim, Bajendra Kumar, who worked for a contractor,  was trapped in the fire. The fire brigade team found him on the lower deck. They immediately rushed him to the nearby J.J. Hospital, where doctors declared him dead on arrival.

The J.J. Hospital in its statement said that the victim had suffered 100 per cent burns.

The details about the total number of workers on the warship at the time of fire were not known till late night.

Mr Rahangdale said, “The spread of fire was restricted around 10 pm but the ship had tremendous heat and smoke. Navy submarine fire team and Mazgaon fire fighting team were present at the spot.”

Construction on ‘Visak-hapatnam’, the new class of stealth destroyers under the Project 15-B, started in April 2015 and the first of the destroyers is scheduled to be commissioned by 2021.