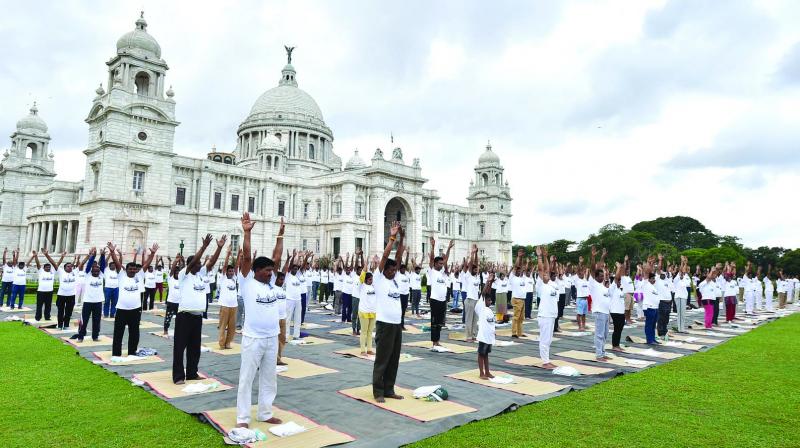 CISF personnel along with others perform yoga during the 5th International Day of Yoga in Kolkata on Friday. (Photo: PTI)

Kolkata: The fifth International Yoga Day was celebrated by the three services in the state. The Eastern Command with an aim to promote better mental and physical health of people through Yoga celebrated the day on the theme “Yoga for Heart” all over the Command theatre.

A large number of troops, their families and local citizens participated from far-flung areas of the East and North Eastern region to spread awareness and promote a healthy lifestyle.

Various workshops were organised by the units of Eastern Command at Kolkata, Dimapur, Shillong, Tezpur, Sukna, Panagarh and all other military stations involving the local population to create awareness about Yoga and encouraging people to incorporate this form of exercise as a means to achieve a healthy life.

It started with the opening prayer and was followed by standing and sitting yoga postures, pranayama, breathing techniques followed by meditation. The yoga instructor along with demonstrations also showcased the importance of Yoga and its benefits in daily livelihood.

Tulsi and aloe vera plants were distributed to all the participants as these plants have numerous benefits. Yoga sessions were also held at Air Force Station Kalaikunda.