The party has also asked its people to start relief-related work in drought-affected districts in order to provide respite to distressed farmers. 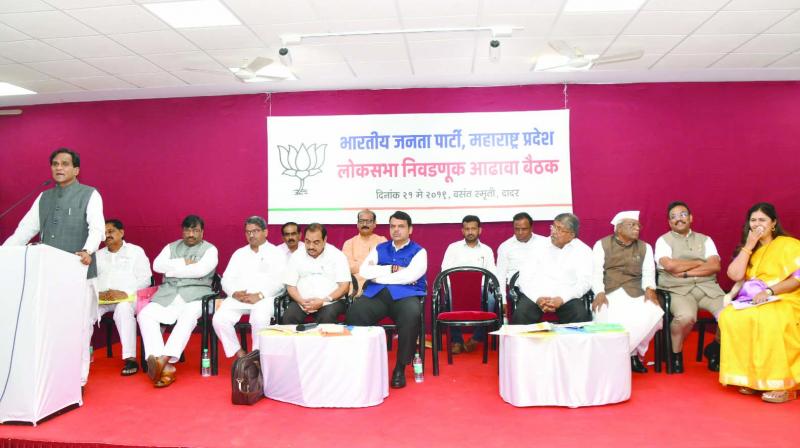 Chief minister Devendra Fadnavis and other BJP leaders at the meeting held at the party’s office in Dadat on Tuesday. — Asian Age

Mumbai: With the results of the Lok Sabha election yet to be announced, the Bhar-atiya Janata Party (BJP) took stock of all 48 parliamentary constituencies at its city office Vasant Smruti in Dadar on Tuesday.

All party men including chief minister Devendra Fadnavis, sitting MPs, Lok Sabha candidates and office-bearers participated in the meeting where BJP leaders also discussed the drought situation of the state.

A senior BJP minister, who was also present, said that as per the review of the meeting, the BJP-Shiv Sena allia-nce is going to get at least 38 to 40 Lok Sabha seats in the state. The party has asked all its office-bearers and legislators to start working for the Assembly election, whi-ch is scheduled for three months later, as soon as the general election results are out.

Senior BJP leader and finance minister Sudhir Mungantiwar said that the suggestions of all the Lok Sabha candidates had been considered at the meeting.

He said that all the public representatives of the BJP would be visiting fodder camps at drought-affected areas in the state. All the district units of the party would render their services for drought-mitigation measures, he said.

Mr Mungantiwar said that the local MLAs’ fund would be used for drought relief measures. The government will issue a GR regarding the MLAs’ fund, which can be used for the mitigation measures, he said.

The party has also asked its people to start relief-related work in drought-affected districts in order to provide respite to distressed farmers. The MLAs’ funds will be used for fodder camps and water tankers.  The party has also directed legislators review the implementation of the mitigation measures undertaken by the government.