Fire brigade to get special vehicle for high-rise soon

The Brihanmumbai Municipal Corporation in its budget for 2019-20 had made provision of Rs 2.5 crore for this vehicle. 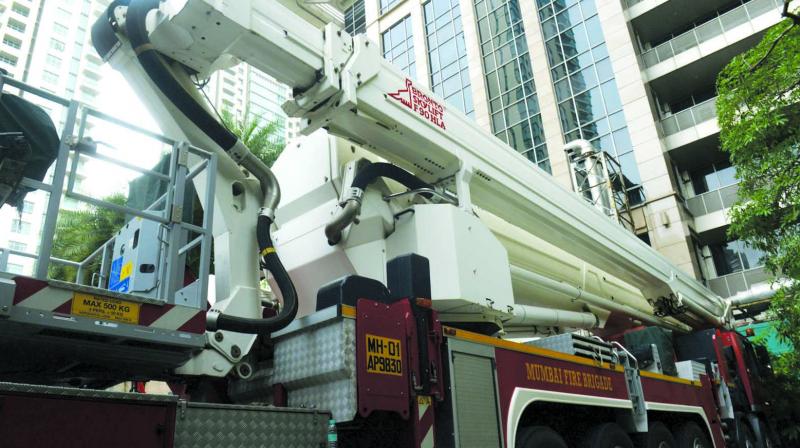 The BMC made a provision of Rs 2.5 crore for the vehicle.

Mumbai: The Mumbai Fire Brigade (MFB) will soon have a special fire-fighting vehicle to tackle fire in high-rise buildings (up to 50 floors). The special fire-fighting engines for high-rises will have water tank capacity of 10,000 liters. “The last day for contractors to fill the tenders is on Monday, April 22. It will take two months to finalise the contract and in six months we will have the vehicle,” deputy fire officer, Rajendra Chaudhari said.

“The new vehicle will play a major role in tackling fire in high-rises specially when the inbuilt fire fighting system is non functional. This vehicle can take water with maximum pressure up to 50 floors. The cost of the vehicle is Rs 2.5 crore. However, it is yet to be decided in which fire station the vehicle will be parked. After we get one, we will procure more,” said Mr Chaudhari.

The Mumbai Fire Brigade made a decision to procure a vehicle to fight fire exclusively for high-rises after several incidents of major fires were reported on top floors of buildings. The chief fire officer has recently accepted that amidst rapid development in Mumbai there is a rise of 30 per cent of minor fires turning into major.

Considering the rapidly coming up tall buildings in Mumbai plus the narrow roads, the Mumbai Fire Brigade finds it difficult to reach the spot on time. The fire-fighting operations also get delayed resulting in spreading of fire and rising risks of casualties.

The Brihanmumbai Municipal Corporation in its budget for 2019-20 had made provision of Rs 2.5 crore for this vehicle.