Rahul Shewale is engaged in a fight with Eknath Gaikwad of Congress in the Mumbai South Central seat. 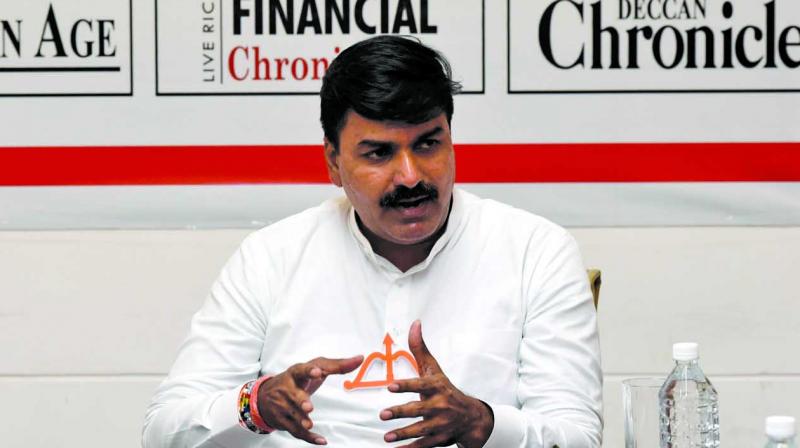 Mumbai: Shiv Sena MP Rahul Shewale has demanded a centralised law by merging the laws of Centre, state and Brihanmumbai Municipal Corporation (BMC) for the implementation of Development Plan (DP) 2034.

In an exclusive interview to The Asian Age, Mr Shewale, who is contesting as a Sena candidate from the Mumbai South Central constituency, said that the centralised law is the need of the hour for the effective implementation of DP 2034.

“There has been only seven per cent implementation of the last DP. In this context, a centralised law should be formed merging the laws of Central, state and the BMC for the DP implementation,” he said.

The MP added, the BMC’s existing land ownership in the city is only 45 per cent, whereas the remaining 55 per cent land belongs to Centre, state and private parties. The BMC land acquisition law has its limitations and it cannot supersede the laws of Central bodies like defence, railways, customs etc. Hence, a centralised law is required for the implementation of DP in the city.

“Even for projects like widening of stormwater drains and roads, the people are shifted to Mahul. We do not have alternative places. The rehabilitation buildings in Mahul lack basic facilities and people are not ready to shift there and want to be in centre of the city. So we are planning to build homes for PAPs in Dharavi where railways have agreed to give 45 acres of vacant land. These slum dwellers can be shifted there which will fasten city's infrastructural development,” he said.

Mr Shewale is engaged in a fight with Eknath Gaikwad of Congress in the Mumbai South Central seat, which consists of Assembly segments like Mahim, Chembur, Sion Koliwada, Dharavi, Wada-la and Anushakti Nagar.

There are reports that the leather business in Dharavi has been affected badly by demonetisation and the beef ban.

Commenting on this, Mr Shewale said, “The leather business has not been affected. Raw leather is still being imported from Pakistan and Bangladesh. The main problem of leather business of Dharavi is that they don't have a market to sell it. Hence, I want to create a brand “Made in Dharavi” to promote their products. I had organised “infrastructure solution summit” last year and got good response from private sector companies and many professionals to improve infrastructure of Mumbai. Next year I would call foreign embassies to participate so we can have good ideas to improve Mumbai's infrastructure.”

The MP expressed hope that he will score an easy win.

“The Central and state government's performance in the last five years will play a crucial role in deciding the result of Lok Sabha elections. Last time I was contesting the Lok Sabha for the first time so I had to study the issues and convince voters. However, the experience of working as an MP for last five years will now prove beneficial for me. Being a member of the Urban Development Committee, I visited several cities, which helped me to study their infrastructure and development. I will try to incorporate these concepts for the benefit of the city,” he said.