Welcoming the Cabinet’s decision to approve the ordinance, Ms Maliwal, said: “Until something concrete happens, I will not give up. 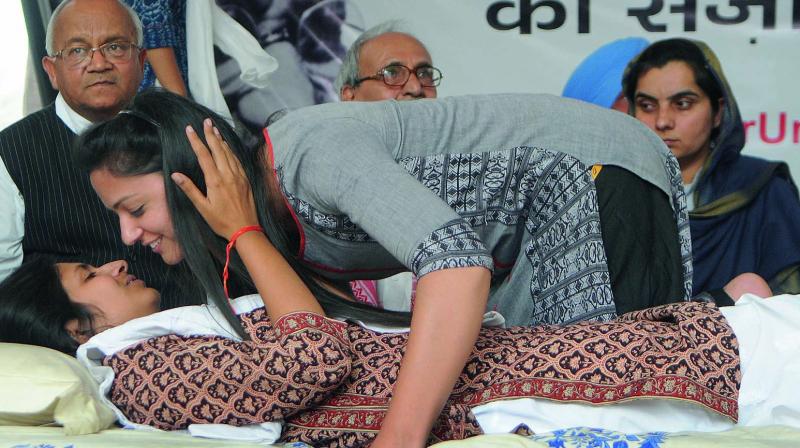 Welcoming the Cabinet’s decision to approve the ordinance, Ms Maliwal, said: “Until something concrete happens, I will not give up.

New Delhi: Delhi Commission for Women chairperson Swati Maliwal, whose indefinite hunger strike to demand death for rapists of children continued for the ninth day on Saturday, said she would end her fast at 2 pm on Sunday. “I’m ending the fast, but the struggle will go on,” the Aam Aadmi Party leader said while announcing her decision.

Earlier in the day, she said that she would continue her fast till the time an ordinance on the death penalty for rapists of children below the age of 12 — which was approved by the Union Cabinet on Saturday — is not promulgated.

Ms Maliwal has been on fast since April 13 in support of her demand in the wake of rape and murder of an eight-year-old girl in Jammu and Kashmir’s Kathua in January and other similar crime elsewhere.

Welcoming the Cabinet’s decision to approve the ordinance, Ms Maliwal, said: “Until something concrete happens, I will not give up. Until a system is there to ensure safety of the last girl, I won’t give up.”

She later said: “I am happy that though, after nine days, the Central government has taken the first step to (propose) death to rapists of small children within six months,” she said and also appreciated the Centre’s plan to increase the number of fast-track courts in the country to help avoid delay in such cases.

However, Ms Maliwal wrote a letter to Prime Minister Narendra Modi on Saturday on her other demands. She said that just changing the law was not enough, its implementation was more important. Even more important was raising police resources and their accountability, she added.