Medical services in 17 government hospitals in Maharashtra, including four in Mumbai, have been affected because of the protest. 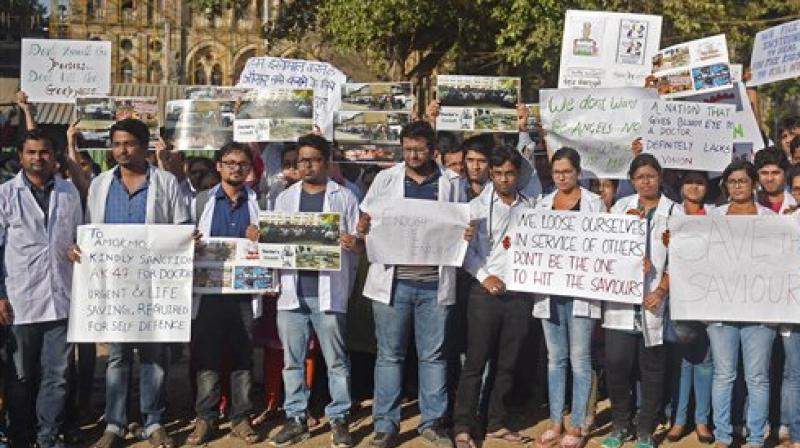 Resident doctors protest at the Azad Maidan demanding security after a intern was assaulted by patient's relatives in Mumbai on Tuesday. (Photo: PTI)

Mumbai: The doctors on strike have agreed to resume work by 8 pm on Wednesday after a meeting with the State Medical Education Minister Girish Mahajan.

"After meeting me, doctors have agreed to resume work by 8 pm," Mahajan said.

The resident doctors of state-run hospitals in Maharashtra were away from work for the third day on Wednesday, prompting the government to order them to report to duty by Wednesday evening or lose six months' salary.

The Brihanmumbai Municipal Corporation (BMC) on Wednesday issued a notice to 500 resident doctors asking them to resume work or face consequence.

Nearly 4,000 doctors had been on strike in various government and municipal hospitals since Monday demanding security at work place in the wake of a string of attacks on their colleagues.

As many as 500 resident doctors in medical colleges in Mumbai had been issued notices by their deans, an official from Maharashtra Association of Resident Doctors (MARD) said.

Also, 370 resident doctors in Nagpur, 200 in Pune and 114 in Solapur had been suspended by the deans of their respective medical colleges, the official said.

Their protest had mainly affected the medical services of Out-Patient Departments (OPDs) and general wards, a MARD official said.

"The resident doctors should report to duty by today evening or they will lose their salary for six months. The students of post graduate courses who are serving as resident doctors will also face the action," Mahajan had told reporters.

"We have all the legal provisions to take such steps," he said.

"We have assured them of providing enough security and it will be given by month-end. Now, they should resume the duty," the minister said.

He had said patients from the economically weaker sections come to government hospitals and the resident doctors should not play with their lives by taking such an extreme stand.

Medical services in 17 government hospitals in Maharashtra, including four in Mumbai, have been affected because of the protest.

The OPDs in these hospitals have been hit hard as only senior doctors are available to attend the patients.

MARD, the apex body of the resident doctors, had officially not supported the decision of the medicos to stay away from work, but many of its members are a part of the ongoing protest.

The Bombay High Court had on Tuesday rapped the medicos while observing that their conduct was "shameful", and asked them to resign if they don't want to work.

However, the hearing on the petition filed by activist Afak Mandaviya, seeking action against the protesting doctors, was adjourned in the High Court on Wednesday as the bench presided by Chief Justice Manjula Chellur was not available.

The plea will to be heard on Thursday.

Asked about negotiations with the Maharashtra government, MARD's general secretary Dr Parthiv Sanghavi had said, "When we contacted Medical Education Minister Girish Mahajan regarding the same, we got just two minutes with him."

A senior official from the Medical Education department had said, "We have assured them of deploying some 400 security personnel by April 1, but the resident doctors are not convinced by it."

"They want it immediately but as the budget session (of Maharashtra Assembly) is on, without informing the House, government cannot take any major decision," the official said, on condition of anonymity.

"Currently, the demand of the resident doctors is to be provided security immediately and to restrict the entry of relatives while admitting a patient in the hospital. The negotiations are still going on," the official said.

Dr Sagar Mundada, Chairman of Indian Medical Association's youth wing in Maharashtra, said, "It is true that in some government and municipal run hospitals there have been delays in treating the patients."

"One must not forget that resident doctors are the junior most medical staff working in such hospitals. There are senior doctors as well as visiting specialists in such hospitals and they are attending to the patients," he said.

"If an OPD is kept close and patients are suffering, then the onus is on the dean of the medical college attached to that hospital as he is the administrative head. Unfortunately, we are blamed for causing inconvenience to patients, whereas nobody is questioning why the existing medical staff is not running the OPDs and other medical services," Mundada said.

He claimed that all emergency services, including attending to serious or critical patients, were being taken care of by resident doctors.

Since day one, the resident doctors have taken a stand to not hamper the emergency services, he said.

On the demands of medicos, Mundada said, "The resident doctors need sufficient security staff at the hospitals. The dean of a medical college has special funds to appoint security guards at the gates and outside special wards. No dean uses the funds and resident doctors face the wrath of relatives if something goes wrong."

"When more relatives gather in a hospital, it becomes difficult for any doctor to answer all their queries," he said.