State board claims it was wrongdoing on part of students. 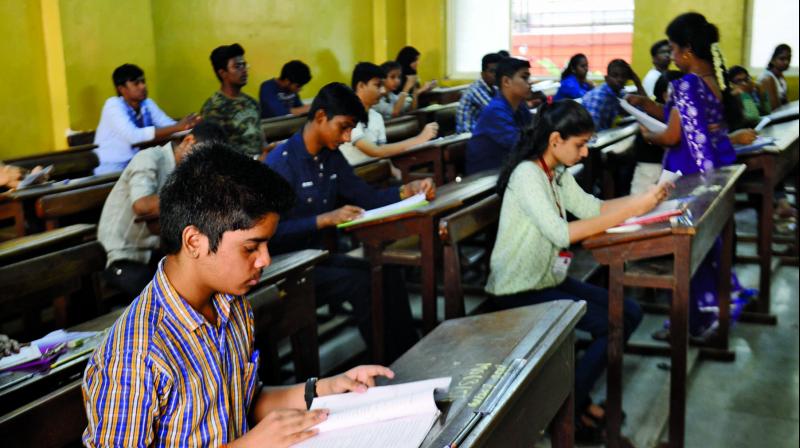 Pune: Despite stringent measures being adopted to prevent cheating, the Class 12 Higher Secondary Certificate (HSC) exams started on a sour note on Tuesday following reports about an English paper being allegedly leaked on Whatsapp in a Solapur education institute within an hour of the exam commencing.

The images of certain portions of the English paper were allegedly circulated over social media in an Ashramshala in Tambewadi village in Solapur district’s Barshi taluka, said sources. While details are yet to emerge, state board authorities denied that a ‘leak’ had occurred, terming the incident as a “misdemeanor” on part of some students.

Speaking to The Asian Age, Shakuntala Kale, chairman of the Maharashtra State Board of Secondary and Higher Secondary Education (MSBSHE) said, “We are probing the case. I would not say the paper was leaked. This appears to be a case of wrong doing on part of the students. Flying squads are collecting information on the matter.”

According to state board officials, on the first day of the HSC exams around 62 cases of copying were detected by the flying squads across all the nine regions in the state. While Mumbai did not have any cases, Amravati region led the pack with 21 cases being detected. Nashik and Nagpur followed with 11 and 10 cases, respectively.

Last year, four persons were arrested by the Navi Mumbai police for circulating sections of the Class 12 Secretarial Practice question paper to different WhatsApp groups minutes before the exam started.

The MSBSHE has a strict entry-exit policy in place and students will not be allowed inside the examination hall after 10.30 am, unlike previous years when they were given a window of 30 minutes.