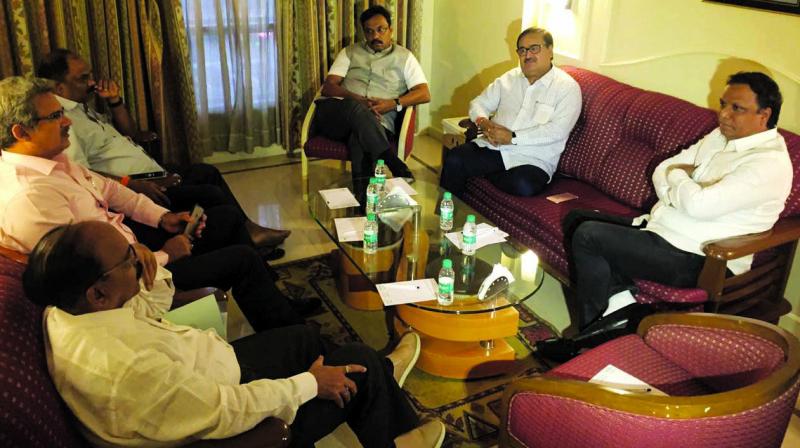 Mumbai: With BJP demanding 114 seats and Shiv Sena offering only 60 for the upcoming Brihanmumbai Municipal Corporation (BMC) polls, the future of the alliance has come to a head. Sources from both the sides said the alliance might not take place between the two.

Leaders from both the sides have left the decision with chief minister Devendra Fadnavis and Sena chief Uddhav Thackeray. The Sena’s offer is way lower than BJP’s expectations. The last time the two faced the BMC polls in alliance, BJP had contested in 63 seats and won 32.

No discussion could take place in the third meeting between the two parties held on Saturday at Rang Sharada auditorium in Bandra, which was attended by BJP Mumbai president Ashish Shelar, education minister Vinod Tawde, housing minister Prakash Mehta, Sena MP Anil Desai, MLC Anil Parab and Ravindra Mirlekar. “We have demanded 114 seats while Sena has offered 60. There was no discussion on the numbers. Now the senior officials will take the decision by tomorrow. There won’t be more discussions on the issue,” Mr Shelar said.

Sena leader Anil Desai supported Mr Shelar. “The proposals were disagreed by both the parties’ leaders. So, we will speak with our party seniors respectively,” he said. When asked why Sena has offered fewer seats to BJP than earlier, Mr Desai said the situation in 2012 was different. In the 2012 BMC polls, Sena had contested in 135 seats, BJP in 63 and RPI in 29 seats.

When the same question was put to Mr Shelar, he refused to discuss the issue. “There is no animosity between the two parties. We just proposed our demand and now we will speak with our leaders,” he said. The sources in Sena said BJP has demanded seats where Sena has sitting corporators, which Shiv Sena does not want to part with.

Meanwhile, Sena leader and environment minister Ramdas Kadam called BJP a ‘barking dog’ on Saturday. “On one hand chief minister Devendra Fadnavis speaks positively for an alliance and invites Sena for talks and on the other hand, allows his party leaders to target Shiv Sena. It’s like a barking dog. But we do not pay attention to dogs,” Mr Kadam said at the Sena Bhavan here after meeting Mr Thackeray.