Political sources however said that it was the biggest political move to please slum dwellers in the context of the 2019 elections. 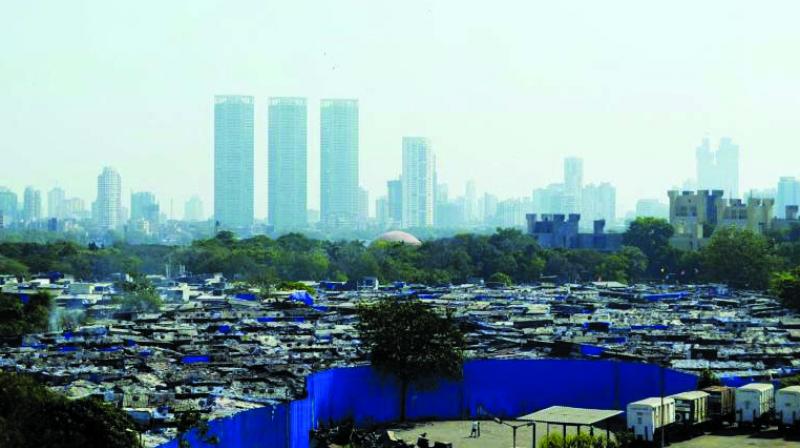 File image of the slums in the backdrop of the city’s skyline.

Mumbai: A major SRA amendment bill with provision for rehabilitation of illegal slums up to January 1, 2011, and other policy changes was passed on Wednesday in the legislative assembly in Nagpur without much discussion.

The bill is important for the city of Mumbai which has a large number of slums, and the state government has increased the cut-off for protection to slums from the earlier January 1, 2000, to January 1, 2011.

Political sources however said that it was the biggest political move to please slum dwellers in the context of the 2019 elections. The decision would have far-reaching consequences in terms of the city’s infrastructure. The bill was introduced in the assembly by housing minister Prakash Mehta and it was passed immediately. As the census of hutments was conducted in 2011, the government has extended the benefit of rehabilitation to illegal slums built up to Jan 1, 2011, instead of the former Jan 1, 2000. This will add 35 to 40 lakh new houses in Mumbai because of the FSI of 4 as per SRA policy. This will allow huge construction in the city after which it will also need to provide for additional infrastructure considering increase in population, said sources from the housing department.

However, the legal department has raised serious objection and opposed the amendment, considering a high court order, sources told The Asian Age. The high court had earlier rejected the government’s plea to increase the cut-off date, and the government may be pulled up for contempt of court. As per the SRA Act, the cut-off date for rehabilitation is 1995 and the high court refused to grant permission to increase it up to January 1, 2001.

With the government having taken such a big decision without any scientific study, consultation or legal advice, the move could also affect other redevelopment schemes. The BMC has approved the Development Plan (DP) of the city and sent it to the government for approval. Open spaces and other infrastructure provisions have been made as per current legal provisions. Now, “outsiders” living in illegal hutments in the city will officially become “Mumbaikars”, impacting the Shiv Sena’s “Marathi Manoos” policy where those living in the state for more than 15 years can get a domicile certificate. However, party sources rued that now, even illegal dwellers could get homes and become a part of the city, legally.