Postcards call for ban of animals in circus

The postcards will be sent to the minister by December 31, 2016. 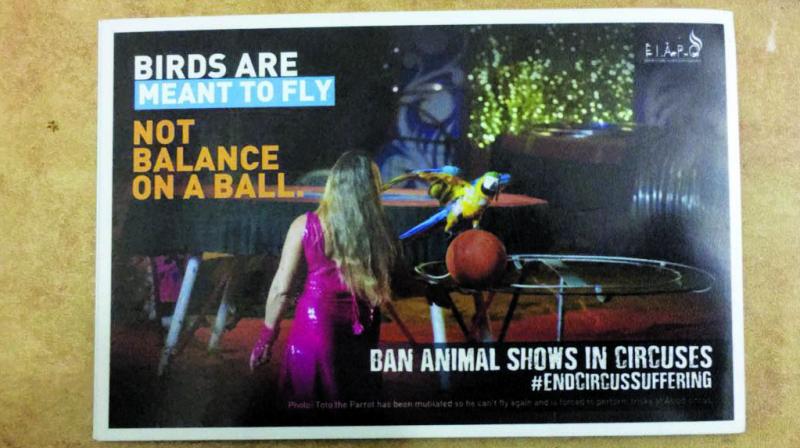 School children from schools all over the country will be asked to send in their postcards by Dec. 25, 2016.

Mumbai: In order to put a stop to animals suffering in circuses, the Federation of Indian Animal Protection Organisations (FIAPO) has come up with a postcard campaign — ‘End Circus Suffering’ — and has met Anil Dave, minister of state (independent charge) for environment, forest and climate change.

School children from schools all over the country will be asked to send in their postcards by December 25, 2016. The postcards will be sent to the minister by December 31, 2016.

FIAPO is an organisation that works for animal protection across the country. Mumbai too will have volunteers visiting private and municipal schools. Though the schools are yet to be finalised they will include institutions both from Thane as well as Mumbai. These school children after being sensitised will be sending post cards that will not only have messages to save the captive animals but also will appeal for a ban on their use in circuses. India has 53 travelling circuses with 560 animals, including 52 elephants, 137 exotic birds and other domestic animals like dogs, horses and camels.

FIAPO had tied up with Resqink Association for Wildlife Welfare (RAWW) in Mumbai to help them with sensitising the school children of various areas in Mumbai and Thane. Pawan Sharma, founder of RAWW, said, “There is a circus in Mumbai which was raided a few years back but nothing could be done as they had the apex court order with them (stating that they have permission to use the animals in the circus). All this needs to stop and hence the aim of the campaign is also to make a change.”

Prashanth V, senior campaign manager, FIAPO, said, “We have launched this nationwide postcard campaign to appeal to the central government to ban the use of animals in circuses. Children across the country will be sensitised to the deplorable condition of performing animals that will then convey their message to the government on picture postcards specially designed for the campaign.” He further added, “Children embody the spirit of all that is innocent and pure in today’s maddening world. They’re also a big reason why circuses still keep animals in torturous conditions. We have thus designed a campaign wherein children send postcards to our minister of environment and forests — Mr. Dave — telling him about the cruelty inherent in circuses and asking him to ban the use of all animals in  circuses.”